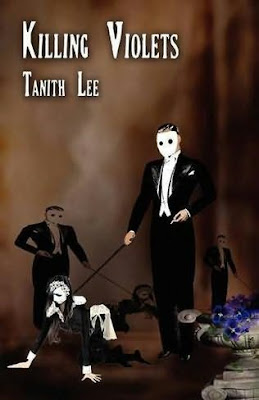 She is ready to sell herself for a meal, but he has other plans. He takes her to England, to a summer of torrential rain, and the dubious mansion of his arrogant and unsavoury relatives, the Basultes.

It seems Anna is also to 'enjoy' the godly Basulte life. But the mounds of stodgy food, the genuflecting servants, the mindless cruelty of class, (the endless rain), affront her. Besides, she is becoming aware of the family, Raoul included, is playing with her a macabre and silly game.

What a dark, dark little novel this was. I will not lie, the cover drew my eye even though at first glance, it's not that flashy.  But there is a strange little creepy element to it.

I had a hard time putting this tale down, but there were some confusing moments in the beginning as we flash to Anna's past. I find it helpful when an author assists in the transition by dating it, or indicating in some way that you are at a different period of the character's past, and I didn't find a smooth transition at all. However, once you become familiar with the characters, the flow of the story becomes more comprehensible.

Anna tugged at my heart strings. She just doesn't seem to catch a break in her life. The deeper you get into her story the more you feel for her. And yet, she isn't really a victim, or more accurately, stays a victim. She has an uncanny ability to adapt and survive in the worst of circumstances.

Raoul finds her and takes her into this madhouse, where false promises are made.  The Basulte family are a strange and repulsive lot and the antics of the house staff had me snorting very unladylike with amusement.

This was a very entertaining if dark story which kept me intrigued from beginning to end.


This novel was kindly provided by