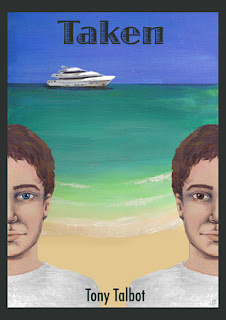 What if your whole life was a lie...?

Amon Russo lives in a huge villa in a huge estate on a secluded Greek island with his super rich parents. He has a private beach, his father has a yacht and as many fast cars as he can think of.
He seems to have it all...
Until he starts to see cracks in his life.

Why do his parents keep him hidden away from the islanders?

Who is the strange girl living next door in a deserted villa?

The truth shatters Amons life, and the price he pays for finding out the truth is almost too high...

If everyone you know is lying to you...who do you trust?


This was a well written, suspenseful novel which starts out with a bang. Amon travels with his father into the city and sees something he is not meant to see, which changes his perspective of his father forever. As a reader, you know right off the bat, there is more to this family than meets the eye, and that something is definitely off.

And so begins a story full of twists and turns, and a mystery surrounding the main character's eyes, superstitious villagers, and what dealings Amon's father is involved in. Strange disappearances occur once people see Amon's eyes, or ask too many questions, and you wonder... Who is Amon and why is there so much secrecy and violence surrounding him?

Though the ending of this novel answers some of these questions, there was a taste at the back of my throat called disappointment. It seemed to end too soon, too fast, and was not as full bodied as you would expect after reading a novel that was so well developed and had so much depth to its characters. I expected a little more in the wrapping up of the story.

That being said, it was a great read nonetheless and written with good skill. The imagery was quite detailed. I felt like I was in Greece myself alongside Amon, seeing the sites, the beaches, the properties he ventured into. The emotions were palatable and strong enough that I felt anxious myself through some of these scenes.

Didn't blow me away, but was definitely an intriguing fast read. 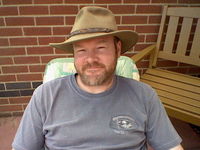 Goodreads Bio:
Tony Talbot started writing short stories in 2008, after a dream he had and couldn't shake; Finally his wife told him to write it down or stop talking about it.

He wrote his first Young Adult novel, Over the Mountain, in 2008, and has completed several others and a growing raft of short stories since.

He lives in a village in Leicestershire UK, with an American wife he met online and a teenage cockatiel. As well as writing, he enjoys reading, playing Mario Kart on the Wii and not getting enough exercise.

You can also connect with him on Goodreads and on Facebook.