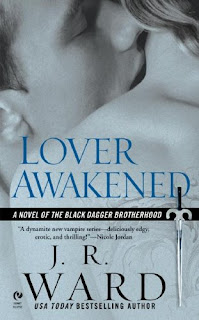 In the shadows of the night in Caldwell, New York, there’s a deadly war raging between vampires and their slayers. And there exists a secret band of brothers like no other - six vampire warriors, defenders of their race. Of these, Zsadist is the most terrifying member of the Black Dagger Brotherhood.

A former blood slave, the vampire Zsadist still bears the scars from a past filled with suffering and humiliation. Renowned for his unquenchable fury and sinister deeds, he is a savage feared by humans and vampires alike. Anger is his only companion, and terror is his only passion—until he rescues a beautiful aristocrat from the evil Lessening Society.

I LOVE the word 'Shitkickers'. I really really do. J.R. Ward loves it too. She uses it a lot.


Like this (quotes not directly from book - just examples of the use):


It is such a pointless and ineffective way to use this word.

There is no Awesomeness in this use.

Makes me feel like this as I write this: ( BLOODY GRAPHIC WARNING )

Here are some better uses for this word.


" (Hot Sexy vampire's name goes here) took the Lesser down to the floor, and flipped him on his back. His foot came down on its snarling, ugly face and ground his shitkicker hard into its cheekbones, slowly shattering its face into the ground, black blood pooling under its head."


Get the drift? Make it AWESOME. Because:


Shitkickers KICK the SHIT out of SHIT!!!!


This book was AWESOME. I love the Brotherhood series!!

My favorite character was Zsadist from the beginning, and this book is centered around him. He came across in the first books as scary, sadistic, but underlying it all, you could just feel there was more to him. A reason for all the walls, the growls, the 'evil' cold feelings seeping out of him. He is a very deeply damaged individual with a score to settle, and a horrible past. And I was so glad to read along his journey of redemption/salvation, whatever you want to call it. My heart just went out to him, and I wanted him, so badly, to have a happy ending.


J.R. Ward really is a master at the development of all these characters. You empathize, and connect with each Brother, and all the other characters that are introduced. Heck, I even found myself feeling sorry for evil bastard Mr. O. But - May he die a thousand deaths for what he did at the end of this book. Poor Tohr... How I feel for you... (don't want to enter a spoiler so I will leave it at that). I found my eyes leaking a couple of times while reading this novel - that is how invested you become reading this story.


I can't wait to start the next book.


Published: September 5th 2006 by Signet
Purchase Links:
Buy it at Chapters/Indigo books!
Amazon - for paperback and kindle version
About the author:

(From Wikipedia)
J.R. Ward is the number one New York Times bestselling author of the Black Dagger Brotherhood series of vampire books. She is a winner of the prestigious Romance Writers of America RITA award for Best Paranormal Romance and is a multiple RITA nominee. A graduate of Smith College, she was a double major in History and Art History with a medieval concentration in both and she still longs at times for a return to those days sitting in dark lecture halls, looking at slides of old triptychs and reliquaries. Prior to becoming a full time writer, she was a corporate attorney, serving for many years as the Chief of Staff of one of Harvard Medical Schools premier teaching sites. Her idea of absolute heaven is a day filled with nothing but her computer, her dog and her coffee pot and the Brothers, of course.
Posted by Bookluvrs Haven at 11:04 AM