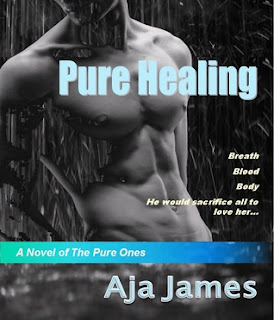 In the world of Pure Ones, where sexual intercourse with anyone other than one’s Eternal Mate leads to a slow, painful death within thirty days, love comes with the warning label “fall at your own peril.”

Rain, the Healer of this immortal race, is the only exception to the rule. In order to harness and accumulate enough energy to heal severe wounds, she must take a Consort once every ten years and draw strength from his blood and body through sexual exchange. As the war with vampire hordes wears on, few Pure-males who are strong enough to serve as her Consort remain.

Valerius is one of the few. As the Protector of the race, he is by far the strongest candidate Rain could hope for. Despite their instant attraction ten years ago when they first met, Valerius has staunchly avoided
to be the Healer’s Consort. The brutality and violence he suffered as a Roman sex slave in his human life ate away at his soul, leaving a raw, gaping wound of anguish and self-doubt, which two thousand years of stoic, solitary existence has not been able to heal. (For full blurb please click here)

Ahhhhhh!!!!! I know I am stingy with the 5 stars, but this one came soooo close! I will explain why in a sec!
This novel was fantastic! It was extremely interesting, with a wide cast of mystical, and intriguing characters, and juicy, passionate romance.  The intensity between Valerius and Rain made my heart palpitate. The back story of Valerius was intricately explored, and you just want to weep for his pain and hope he finds the healing that he yearns for, wishing that Rain makes him whole... but there are many obstacles in their way.  Rain herself has a painful past of her own, while shouldering immense responsibilities for her race as the Healer, never 'allowed' to give her heart to anyone without dire consequences... and she yearns for her warrior with an intensity that left me feeling ragged, and hopeful of a way for it to happen.

On the sex-ohhhh-meter... ya the scenes were pretty hot, though I found the emphasis of Valerius' uhmmm... man parts... to be quite cliche. It's not the size of the wave people, it's the motion of the ocean! Come on! What's with the trend of writing about men that technically should be hurting you with the monster they yield!  But in all honesty, it didn't really affect the sexiness of the whole thing. Just sayin'... they don't have to be hung like... (clears throat)

Though the novel was focused on Valerius and Rain, many characters were introduced. In fact, our little Pure One queen, Sophia, even tells some of the present events in her own first person voice. She is an endearing teenager on the cusp of womanhood, who holds responsibilities of her own that in her teenage mind, are still just a nuisance. I enjoyed the change in voice, whereas in some books, I would be thrown off by the switch from third to first person. It was a change in pace, in intensity, and I enjoyed delving into another character's mind that was a little more preoccupied with trivial things. But of course, she is also on the cusp of love, and with that comes confusion, and that in itself was quite interesting.

The one thing about this novel that I struggled with is that it took place in the real world, in real time.  With the exception of Sophia, who fit right in, I had a very difficult time establishing that all these other characters were, at one point, casually walking through the streets of Boston, wearing regular human clothes, and engaging in jobs, or other human like activities.  They were so mystical to me, in both appearances, demeanor, behaviour and of course skills, that I just could not place them in that setting. Every single time that they were placed in a real world environment, I had a hard time swallowing it.  And to be honest, I don't know what other scenario they would fit in best... but they did not feel like they belonged within the normal human world.

That, and only that, was the 1/2 star hold back, but an important issue for me as a reader. Those scenes seemed superficial. There was little to no interaction with humans, with the exception of Sophia who attended college and interacted briefly with Ere (who by the way, I highly doubt is only a civilian human... I am CONVINCED he is trouble, and something more than he appears).  I am not sure how to explain it but to say... I didn't buy the whole walking-through-a-busy-Boston-intersection scene.... Just couldn't picture it.

I thank the author for the chance to read it for the purposes of a review. It was excellent and I highly recommend it. I look forward to future installments of what appears to be, an excellent series.

Posted by Bookluvrs Haven at 9:20 AM