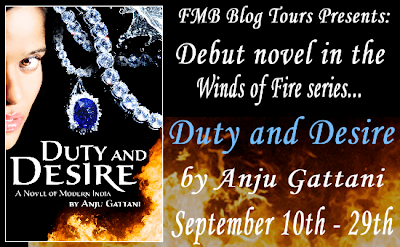 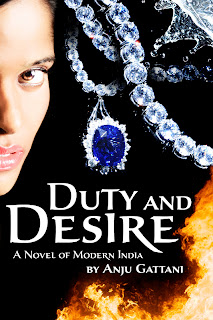 How Can Happiness Survive When Duty Clashes With Desire?

Sheetal Prasad has it all: youth, beauty, wealth and education. But when this modern Indian woman surrenders love for honor and marries into India’s most glamorous ‘royal family’, these very advantages turn against her and she is stripped of her freedom.

Meet the Dhanrajs — a powerful family bound together by a web of lies where infidelity, greed, secrets and hidden identities lurk beneath the lush tapestry. The Dhanrajs have plenty to hide and will do what it takes to mask the truth from the world.

As Sheetal peels back the layers of deceit, she confronts a haunting reality and is threatened by the blazes of passion she ignites.

A friend of mine is really into Bollywood movies. She made me sit down for one once, and I was hooked. How can you not be? They are full of happy music, awesome dancing, amazing colorful costumes, and of course, a ridiculously tragic story of forbidden love. So occasionally, I will watch the odd Bollywood movie here and there, with a full bowl of popcorn, and a box of kleenex in near proximity.

I can't say that I have picked up similar novels, but this one sounded very interesting to me. Besides, I love reading about different times, and different cultures. And this novel did not disappoint at painting a very vivid picture of the culture.

Set in modern India, Sheetal is desperately in love. But when Arvind asks her to marry him, it is the most bittersweet moment of her life. Because Arvind is of poor means, and a match that her father would never approve of.  She is initially torn between love and duty, but duty prevails.  In an attempt to bring honor to her family and in obedience to her father, she agrees to the arranged marriage to Sanjeet Dhanraj. The Dhanrajs are a most prominent family, and her family is thrilled with the marriage.  Not so the case with Sheetal and Sanjeet. Sheetal and Sanjeet reluctantly begin their lives together as man and wife.

The characters in this novel were very complex, and at times... confusing. They all ran hot and cold, from one moment to the other. Sanjeet seemed to be two completely different men - adoring and loving in one moment, trying to win the heart of his bride, and utterly cold and indifferent the next, at times without provocation that I could see.

Sheetal too seemed to have moments of serious indecision, where she would respond to her husband, to other times run from him in anger and despair when he was at his most loving.

Sanjeet's stepmother was a whole other creature. I just couldn't figure this woman out, she was so out there.  Yet, I was utterly intrigued with this novel. Was it the constant drama? Oh hell yes! It was like reading about a new show called the Housewives of Bollywood. Constant ridiculous dramatics, love tug of wars, female hysterics, and male indifference? Absolutely! Bring it on!

Even though I am personally not very content with the way it ended, it was definitely an entertaining novel from beginning to end. A worthwhile read.

There are many stops along this tour. Check out the tour schedule HERE!

“She loved him. She reached out to touch him and soothe his anger. “I risked everything just coming here to be with you.”
“Not to be with me. To tell me. You came to tell me you’re marrying someone else. And you expect me to do nothing?” That’s exactly what she did expect, because society required a woman to marry the man her parents chose for her.
Arvind grabbed Sheetal by the shoulders and gazed into her eyes. “Do you understand how much I love you?”
She understood. “I have no choice, Arvind.” Sheetal took a long, deep breath and clasped her fingers together. “Love isn’t enough for my father. Money, reputation, class and status. That’s what matters to him.” Until now she had ignored the imitation suede shoes on his feet and the ripped, beige, front pocket of his shirt; things she would have never have noticed if her mother hadn’t brought them to her attention a while back. “My father wants me,”—she bit her lip, knowing her words would hurt him—“well taken care of.”

Anju was born in India but grew up in Hong Kong. Her Indian upbringing and British education worked together to strongly influence her writing.

Anju’s fiction explores how the distinct mindsets and traditions of different cultures permanently shape people’s values, thinking, and behavior patterns—for both good and evil—despite the “leveling” effects of 21st century communications and travel.

Anju earned a Bachelors degree in English Literature in India and a teaching degree in the United Kingdom. She has also studied creative writing.

Anju has lived in Singapore, Australia, India, New Jersey and Connecticut. She now makes her home in Atlanta, Georgia, with her husband and two kids. Anju is a columnist for a multicultural magazine in the USA. She is also an avid guest blogger, who loves to share her experiences in health and fitness, food, self-empowerment and great fiction reads.

Duty and Desire is her first novel.