A sneak peek of Feeback, by D. L. Richardson - an FMB Blog Tour! 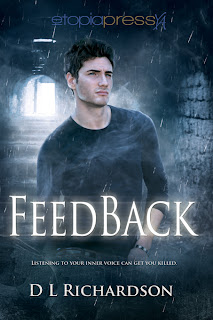 Ethan James, Florida Bowman, and Jake Inala need organ transplants. When they receive the organs of a dead CIA agent, Dylan Black, they take on more than the task of completing the mission of deactivating bombs that threaten millions of lives. Kidnapped, their lives under threat, the memories stored in the CIA agent’s mind begin to awaken within each of them, except the one piece of information they are abducted for - the location of the bombs.

Music first captured the creative interest of D L Richardson. She got her first acoustic guitar at age ten, and in high school she sang with the school band. When she left school she helped form her own rock band where she sang lead vocals, played bass guitar, and wrote all the lyrics. At age 26 she realized she wanted to write novels for the rest of her life, or die trying, so she sold her equipment, quit pursuing a music career and began writing instead. She currently lives in Australia on the NSW South Coast with her husband and dog. When she’s not writing or reading she can be found practicing her piano, playing the guitar or walking the dog.