Welcome our blog tour stop of Charlotte Abel's amazing novel, 'River's Recruit'. We have a 5 star review and a giveaway for two e-copies of this novel for you to win! And you want to win this one. I could not put this down and can't wait for the continuation! 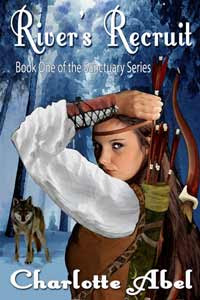 Jonathan McKnight lost everything in Afghanistan. His left hand, his identical twin, his self-respect and his naive belief that good always triumphs over evil. Burdened by grief and guilt, he searches for redemption on a solo backpacking trip into the remote Sawatch Mountains of Colorado and discovers a secret tribe of shifters.

River, the beautiful young shifter that rescues Jonathan has been promised to a man she despises. A man that does not desire her and only wants to use her to achieve his own political goals. Jonathan is more than a romantic rival. He’s a threat to those goals.

The only way to save Jonathan’s life is for River to take him as her recruit.

As Jonathan learns more about the horrors of River’s cult-like society, he becomes even more determined to escape it, until he learns that River is responsible for everything he does and will be executed if he succeeds.

Escape is not an option—unless Jonathan can persuade River to leave with him. And if she refuses? Well, then, he’ll just have to kidnap her.

A picture/gif can convey a thousand words for the reviewer who is seriously stumped on what to write, because he/she just loved a novel so much they honestly don't know where to start.


I loved this story. There are so many elements to it that I enjoyed, that I don't even know where to begin. But I must have read this in record time considering how much I had going on. I was literally attached to my Kindle the whole time, sneaking in a page whenever I could.


This story features two people, Jonathan and River, who couldn't be from two more different worlds. River grew up in a secret community hidden deep in the wilderness; a community of shapeshifters hidden from the 'real world'.


Jonathan, a soldier that has lost more than he thinks he can bear in Afghanistan, takes a backpacking trip to help sort himself out, and accidentally stumbles into a world he had absolutely no idea existed.


And so begins this amazing love story between two people that you would think were as different as night and day, but all is not what it seems....

I loved the slow build of the story between Jonathan and River. It was believable, sweet and built so much anticipation, I was anxious for them to express their feelings once and for all!

River is strong spirited and strong willed. Two traits I enjoy in female characters. But she also is kind hearted and loyal to the family that took her in when she was younger. Living in the harsh society that is her hidden, secretive community of shape shifters, Jonathan is strange but intriguing to her.

The writing style was amazing. I was pulled into this story and I couldn't shake this book off for a second if I tried, until it was finished. There were twists and turns, revelations and betrayals that left my heart racing and desperately wishing for the next installment.  I can't really express to you how anxious I am for this second book to come out.


*I received a eBook copy of this book for free to review from the author; this in no way influenced my review, all opinions are 100% honest and my own.*


Enter to Win!
a Rafflecopter giveaway 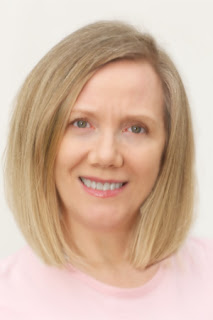 Charlotte Abel was born and raised in Oklahoma where she met her soulmate, Pete. She chased him to Boulder, Colorado and finally convinced him they were meant to be together forever. They've raised three kids, two ferrets, three dogs and countless hamsters -- and are still happily married.
She's in love with "real" life and paranormal romance. When she's not reading or writing, Charlotte enjoys hiking, bicycling and primitive archery (although she's never shot at anything other than a target!)
The final book of The Channie Series, "Finding Valor," should be available by Christmas.
Links:
http://charlotteabel.blogspot.com
http://www.goodreads.com/author/show/4962823.Charlotte_Abel