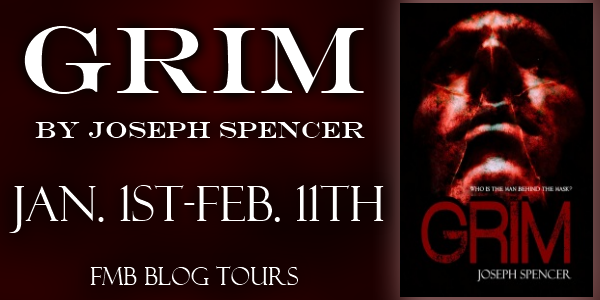 Have I ever told you guys why I love participating in blog tours?

Even when my reading schedule is totally and completely crazy, I still get the opportunity of showcasing a book that sounds really interesting. It's rewarding, and it helps fill up the gaps in between reviews! LOL

But it's always so much fun to also do something new.

Not only is this cover just completely creepy, but for the first time on this blog, we have a character spotlight! How cool is that?

The spotlight today is on Heath Grim. Who is Heath Grim? Click on 'Read More' to find out!  And just in case you want just a little bit more, we also have an excerpt from the book. 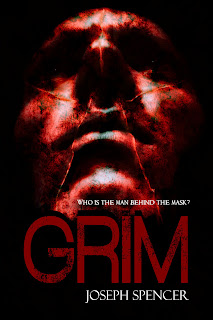 When everything is taken from him, Detective Adam White must choose what's most important. Does he stick to the heroic ideals which made him a famed paragon of justice and take down a murderous madman? Or does he give in to his vigilante impulses, avenge his wife's murder, and become the type of killer he's hunted for so many years?

Heath Grim has felt isolated and unfulfilled his entire life. The reclusive millionaire never knew his parents, and his stepfather acted as little more than a drill sergeant during his childhood. Grim joined the army because that’s what was expected of him, but he never enjoyed the things they made him do in the desert. He had his health and an incredible amount of wealth, but he’d never felt any sense of purpose in his life.

When all of his loved ones die tragically, Grim turns to the spiritual world for an ally in his crusade for fulfillment and redemption. He makes a pact with Abaddon, ruler of the spiritual abyss in the afterlife and avenger of the souls of the wrongful dead. In return for help avenging his stepfather’s murder, Grim agrees to hunt down and execute vicious criminals so that the souls of their victims can move on from limbo to their rightful place in the afterlife.

Grim is conflicted about his newfound sense of purpose. Though he knows the despicable men he hunts deserve their fate, he wonders if what he’s doing makes him no better than they are. He feels guilt over killing innocent people in his last tour of duty in the military, and he sees his work as a way to make amends. Yet, he’s not fully convinced he’s doing the work of God as Abaddon suggests. When Grim looks in the mirror, sometimes he sees a righteous avenger, but other times he just sees a monster.


When Grim meets Detective Adam White, he’s intrigued. Though he knows he should be scared that Prairieville’s hero cop could figure out what he’s doing and lock him up, Grim also sees their meeting as an opportunity to justify his work. If a man championed for his virtue and dedicated to dispensing justice approved of what he’s doing, then Grim would know for sure that what he’s doing is right.

Organized crime kingpin Cyrus Black presents Grim with another dilemma which will test his resolve. Black covets Grim’s real estate holdings as a potential place to put a horse racing track. When Grim rebuffs his advances, Black shows that he’s more than willing to go to whatever means, legal or not, to acquire the land. Grim feels an obligation to keep his tenants safe from the potentially deadly schemes Black plans to use to get his way.

With both the law and the mob closing in on him, Grim feels the pressure to avenge his father and redeem himself before he winds up behind bars or dead. The emotional toll of hunting for Abaddon also is mounting and threatens to rob Grim of all of his sanity and humanity. He must solve his identity crisis before it’s too late. Who is the man behind the mask? Avenger or monster?

Adam heard a few sounds of Velcro peeling from its straps. Suddenly, Black Mask shed the mystery and ambiguity of his head gear. He became another mystery altogether. What happened to this guy? He looked like he’d seen hell, escaped, and doctored his face to give everyone else on Earth a preview.

Black Mask obviously suffered from rosacea because his skin was inflamed, swollen, and the angriest shade of red Adam had ever seen. A jagged circular scar similar to a clock face ran from Black Mask’s forehead down his cheeks to his chin. A vertical scar ran straight down the middle of his forehead and along the bridge of his nose. Two horizontal scars extended from the side of his nose and curved upward toward the temples. Two additional scars extended outward at angles from just under his nose, across his lips and ended on either side of his chin. All of the scars connected to the outer circular one like spokes to resemble a starfish shape. Adam struggled not to have any reaction, but failed to keep the corner of his mouth from inching up into a grimace.

Black Mask smirked and put his right hand up to his face. He pretended to be admiring himself in the mirror. “It’s okay, Detective. Your reaction is fairly common and a lot more subdued than most. Of course, I bet you’ve seen a lot of horrors in your line of work.

Don't forget to check out these awesome bloggers who are also hosting various posts for this tour by clicking here. 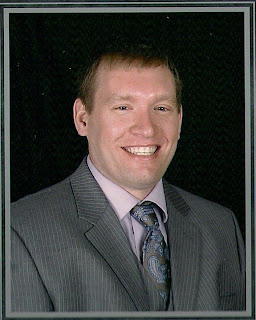 
Joseph Spencer is the author of the Sons of Darkness series launched by his debut novel, Grim, on September 1, 2012. Work on his second book of the series, Wrage, is already underway and is expected to be released some time in 2013.


The Sons of Darkness is a series of paranormal crime thrillers following investigations into mysterious deaths in the central Illinois city of Prairieville. Home of the notorious serial killer, The Reaper, Prairieville has had a history of violence centered on an ongoing feud between the Marino and Black organized crime families. When bodies start showing up again at the abandoned Marino State Hospital, many fear the Reaper has returned. The people of Prairieville are about to find out their problems stem from a supernatural source which has lurked in secret for decades.


As a boy, Joseph Spencer immersed himself in the deductive logic of Sherlock Holmes, the heroic crime fighting of Batman and Spider-Man, and a taste for the tragic with dramas from poets like Shakespeare and Homer.


Before Joseph took to spinning his own tales, he pursued a career in print sports journalism, graduating with honors from Clinton (IL) High School in 1996 and summa cum laude from Southern Illinois University-Carbondale in 2000. He covered such events as NASCAR’s Subway 500 race in Martinsville, the NBA Draft Camp in Chicago, the Junior College World Series, and Minor League Baseball’s Midwest League All-Star Game during a ten-year career throughout the Midwest. Now, he works as an emergency telecommunications specialist with an Illinois police department. The combination of years of writing experience with a background working with law enforcement professionals gave rise to his writing aspirations.


Joseph was married Dr. Amy (Waggoner) Spencer, an accomplished veterinary doctor, on March 14, 2012. He received word his debut novel was accepted by his publisher, Damnation Books, the next day. Joseph and Amy look forward to their honeymoon in Paris in September 2012. Murphy, a 15-year-old orange tabby, is perhaps the most vocal member of the family. The Spencer family enjoys reading Charlaine Harris, George R.R. Martin, Mary Janice Davidson, and most paranormal stories. The Spencers also enjoy quoting movie lines from The Princess Bride, Rain Man, Bridesmaids, and Office Space.