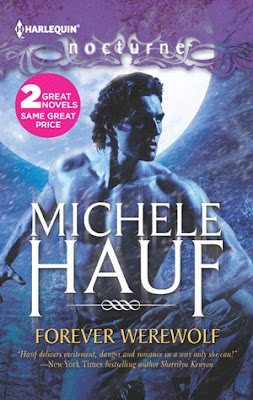 
Alexis Conner, princess of the Alpine pack and pureblood werewolf, hides a painful secret—she has never shifted. If she can't shift, she can't mate, and so Lexi resigned herself to a lifetime of loneliness. But then a stranger arrives, and Lexi senses that her world will never be the same….
A massive avalanche might be to blame for Trystan Hawkes getting stuck at Castle Wulfsiege, but after one look at Lexi, Trystan is not about to leave. Lexi is strong, smart and incredibly sexy. Not that it matters. Tryst is an omega—the fabled lone wolf. Even more damning is his mixed vampire heritage.
Lexi knows that the vampire blood running through Tryst's veins makes him off-limits, but what if he's the one man who can rouse her inner wolf?

This Harlequin novel is actually two stories in one.  'Forever Werewolf' and 'Moon Kissed', both werewolf/shifter stories. I had different opinions of both, so I took the average rating to give the book its overall of 3 stars. I have decided in this case to review each story separately.

Trystan is what you would expect from any Harlequin type story, at least as a first impression. Strong, muscled, beautiful male specimen, who also had an unbelievable heart that is constantly focused on others over himself.

Lexi is the frosty pure-blood werewolf princess who is reserved and prefers to keep her distance.

Both have secrets, and both are undeniably drawn to each other.

Secrets don't stay hidden for long, and once disclosed, it could threaten their new budding romance.

A hateful villain. That is a pro. If you can get me to dislike a character this much means you did a great job of fleshing this character out.

Trystan felt like the kind of male character you would want to fantasize about. But once he met Lexi, he became a puppy of a man. Sometimes his interactions felt immature to me, he seemed overly eager for a moment of her time, and those glimpses of that side of him conflicted heavily with the man he was initially protrayed to be.

The villain was pretty hateful, but the conflict that he created for Trystan was so downright unbelievable considering the proof that had already been obtained, that I literally shook my head in disbelief. Those that believed him were either downright idiotic, or held absolutely no common sense.

Overall the plot was pretty weak, though the romance between the two main characters was sweet and heartwarming.

So glad I stuck it out to read the second story. I enjoyed this one more than the first.

More werewolves and vampires. No complaints.

Severo is sexy, dark, strong,  and has an animal magnetism that just leaked from the books' pages. His sole purpose becomes protecting Bella, and that is very sigh worthy.

Bella is an intriguing character. She appears to be quite independent, headstrong and free spirited.

Their sexual chemistry is through the roof. Their intimate scenes together were super sexy.

This plot was better developed and I was more intrigued by it than the first story.  There are a lot of twists in this story and the ending was pretty unpredictable. I was not sure how the conflict that arose towards the end that threatened their love for each other was going to be resolved.

Severo was a little too aggressive for my liking. He was incredibly controlling, possessive and jealous. I was a bit turned off by some of his behavior.

As independent as Bella seemed in the beginning, she completely gives herself over into Severo's protection and seems to readily accept being completely dependent on him. It seemed out of character based on my first impression of her.

Severo had three forms: human, were, and wolf. There were a lot of references to his were form that made it sound unique. What the hell did the were form look like? You don't get much of a description until close to the end. Would have been more beneficial in the beginning, especially for us visual readers over here!

About this Author: Michele has been writing romance, action-adventure and fantasy stories for over fifteen years. Her first published novel was DARK RAPTURE.


France, musketeers, vampires and faeries populate her stories. And if she followed the adage 'write what you know', all her stories would have snow in them. Fortunately, she steps beyond her comfort zone and writes about countries she has never visited and of creatures she has never seen.