Lily's Review of Outsystem, by M.D. Cooper - A Supagurl Tour 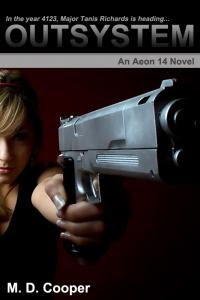 
Someone is out to stop the GSS Intrepid, an interstellar colony ship, from being completed on schedule and beginning its journey to 82 Eridani. When anti-colonial activist groups are suspected, Major Tanis Richards, an officer in the field of military intelligence and counterinsurgency, is brought onboard to hunt them down.


A public disgrace Tanis suffered at the hands of the military has motivated her to leave Sol and start a new life elsewhere. She soon discerns that more than simple activist groups are arrayed against the ship and its crew. There are corporations and governments that have a vested interest in ensuring that the Intrepid never leaves the Sol system.
Tanis tightens security and fights political red tape while running up against assassins and mercenaries sent to the stop her and the Intrepid at every turn. The new friends and relationships she forges strengthen her resolve to protect the ship and keep its crew and colonists safe as they endeavor to head outsystem.

She kicks some serious ass.

She is also the reason why I picked up this novel to review. I am not a science fiction fan, normally. I am quite choosy with that genre and tend to navigate more towards fantasy. Mainly because science fiction writers have a much greater imagination than I could ever hope to have of my own.  In fact, science fiction writers blow me away. I wish I could see into their minds and visualize along with them. I would enjoy the stories so much more, I think. Left to my own meager devices, my imagination sometimes fails to give me a picture of what all the gadgetry, ships, and biological or non-biological beings walking around in said story, look like!  But I figured, since I love strong kick ass heroines, I would be satisfied reading about Tanis, even if everything going on around her maybe didn't make much sense to me... or so I hoped.

It took me a while to figure out that 'humans' are not quite fully human in this world that author Michael Cooper created. They are altered with technology. They have AI's and all sort of gadgets installed that sound quite cool, but were challenging to me in getting the visual. But I think that if I were to imagine her character, the above pic feels pretty good. And she definitely rocked it in this book, and kicked so much butt that Chuck Norris would be jealous.

I wasn't disappointed. The action in this novel is off the charts!

I grasped enough of what was going on to follow along. Cool mission protecting a colony ship, lots of fire power, lots of cool military stuff happening, some great space suits with crazy tech that I wish existed and I owned, and a large amount of tentacles floating about.

I even walked into a wall while reading one of many awesome fight scenes.  That's what you get for walking and reading in your house. I should really learn to hit the off button, and hit the on once I reach my destination... such a challenge.

I gave it a 3 star rating, which means 'I Liked It!'. To some folks 3 stars may mean 'meh'. But for me, who can honestly say came across only two science fiction novels that I can say I loved, in all my years of reading... 3 stars is a testament that this book was great, and I imagine will rock the socks off science fiction fans.

Michael Cooper has been writing since the day he closed Return of the King and wanted more. He's written a lot of fantasy that he never tried to get published, but one day decided to try his hand at science fiction, of which he has published one book (Outsystem) and is working on the sequel, A Path in the Darkness. Michael is a software engineer at a company which builds sites and services around the open-source CMS named Drupal and enjoys the creativity involved in building web applications.
When not writing stories or code Michael is spending time with his wife and daughter, or doing carpentry--a hobby which he has been growing over the years.
His other interests include astronomy, cars and racing, blacksmithing, movies, and just about any creative work one can do.