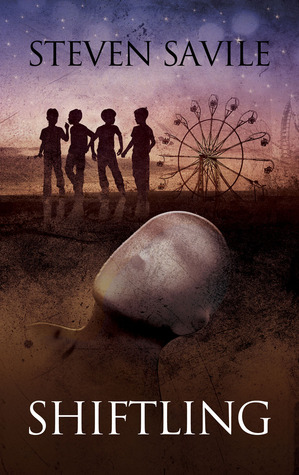 One summer in 1985, the funfair came to the sleepy rural town of Ashthorpe, and with it the smells of hot dogs and candy floss, the allure of magicians and the Big Wheel, and the sounds of young girls giggling. But what promised to be the highlight of the season for a band of teenage boys soon turns to tragedy.

Years later, when Drew receives a mysterious phone call, he learns one of the most important lessons life has to teach: the past can never be forgotten.

For the past wears many faces, and some of them are drenched in blood.

One summer. One hair-raising secretive visit into underground tunnels. A group of boys forever changed.

I couldn't get Stephen King's "It" out of my mind while reading this. Not because there is a creepy clown in these tunnels, but the plot, atmosphere and the group of characters just felt so similar.

It took me a couple of chapters to really get into this story. I didn't connect immediately. But once I realized something sinister was afoot, I sat up and paid attention.

Now all grown up, Drew returns to the town of his childhood and old wounds are opened that he would rather leave in the past and forgotten.  Though you can run from the past, you can't hide. And the truth comes to find Drew, whether he wants it or not.

But what exactly IS the truth?

Even I don't quite know. It is hard to distinguish fact from fiction in this story, because Drew himself can't seem to be certain of what really happened so many years ago.

This dark novella turned out to be a much more sinister and unpredictable storyline than I expected, on some levels.  Muddy memories keep you guessing about what really happened that night in 1985 to these kids. Interesting quick read.

About the Author: Steven Savile (born October 12, 1969, in Newcastle, England) is a British fantasy, horror and thriller writer, and editor living in Stockholm, Sweden. His published work includes novels and numerous short stories in magazines and anthologies.