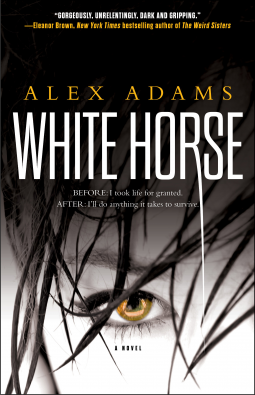 The world has ended, but her journey has just begun.

Thirty-year-old Zoe leads an ordinary life until the end of the world arrives. She is cleaning cages and floors at Pope Pharmaceuticals when the president of the United States announces that human beings are no longer a viable species. When Zoe realizes that everyone she loves is disappearing, she starts running. Scared and alone in a shockingly changed world, she embarks on a remarkable journey of survival and redemption. Along the way, Zoe comes to see that humans are defined not by their genetic code, but rather by their actions and choices. White Horse offers hope for a broken world, where love can lead to the most unexpected places.

As I began this novel I could not help but be reminded of Pandora's box.  You know the one. The box, or more accurately, the jar that Pandora opens and lets forth all the evils in the world. The reason for that is, that from the very beginning of White Horse, the very same thing occurred. Though I doubt that whether or not Zoe would have opened it sooner or not at all would have prevented the utter devastation that happened upon the world.

And it is brutal.

People drop like flies. It starts out like the flu, and before you know it, you are dead, finished, kaput.  There are survivors, or those that have immunity to this plague virus. But they are very few and far in between.

But in the beginnings of this devastating event, a strong love between two people buds. And Zoe will stop at nothing until she finds him, dead or alive... She can't stop, because that one goal is one of the things that keeps her hope alive.

Yes, there are survivors. But the world becomes very changed.  Survival sometimes brings out the worst in people... if they are still people.  Because there is the 'something else'.  That something else was sometimes described... at other times, the writer tantalizes your senses and allows you to imagine the possible horror of what that person has now become. Some of the mutations even defy the imagination and fill you with horror. Others... sadness. Either way, it painted a bleak world even after the virus, called White Horse, made its deadly sweep of the globe.

I really do love pandemic novels, and I know how that can sound really morbid. I certainly can't even begin to understand my fascination with it. I certainly am horrified of the idea, and maybe that is the root of my fascination.  And I never seem to get tired of reading them.

This novel was riveting, with excellent world building.  I admit that I initially had a difficult time with the constant flashes in time, but I told myself to be patient, and soon enough, it all aligned and came together.  This story really was terrifying. It felt realistic and believable, from the how and why of how the virus White Horse came to be, to the characters throughout this novel. You HATE the bad guys, you tear up for the innocent ones that suffer, you feel a deep sadness for the changed that deserved better even if that meant death.. or maybe even life depending on who I speak of.... And most of all, you hope that Zoe makes it to the finish line.

This is the beginning of a great pandemic series that you don't want to miss.

Alex Adams was born in New Zealand, raised in Greece and Australia, and currently lives in Oregon--which is a whole lot like New Zealand, minus those freaky-looking wetas. Her debut novel, White Horse (Emily Bestler Books/Atria) hits shelves April 17, 2012. Her fingers are crossed that the world won't end before then.
Author Links: Goodreads/Website/Twitter