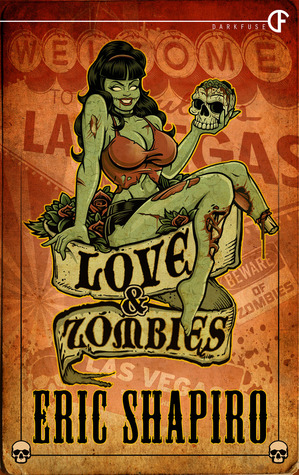 The zombie apocalypse has already ended. The government nipped the problem in the bud before it got out of hand. But now Henry, an aspiring filmmaker in Los Angeles, is getting a request from his old friend Sam Kranson. Sam Kranson says they need to go run an errand in Las Vegas. There's a hefty payday for the job. And it involves capturing a real live zombie.

But that can't be true, can it? Are there zombies out there in the Nevada desert? Or has Sam Kranson finally lost his mind? And more importantly: Will Henry's loving girlfriend Teresa strangle him if he goes on this adventure with Sam?

Part horror, part comedy, all madness and suspense, Love & Zombies is a lunatic burn through three days in the life of Henry—days in which he battles to stay alive, and get back to his love without becoming (un)dead.

Wow, what a twist of a book! But then you read the blurb and you know that this zombie novella won't be like anything you have read.

Henry is a lovable type of character, though Sam is incredibly repulsive. Bordering, if not full speed ahead, on psychotic tendencies, this guy needs to be taken out of the world (my personal opinion).

To make a long story short, Sam decides that it would be a GREAT idea to capture a female live zombie for a disgusting business venture. He gets Henry to venture out with him to Las Vegas to embark on this quest.  This results in one of the most comedic and ridiculous adventures I have ever read.

The book blurb describes this as a " lunatic burn through three days in the life of Henry..." and it couldn't be more accurate.  It is non-stop action once these guys reach Las Vegas.

The sarcastic type tone that is present in this novel is fitting, but sometimes overused. It worked well during some scenes and had the desired effect, but sometimes it was a little too much. It is however, gorgeously written with enough detail that I could really visualize this insanity of a trip, causing me to, in equal parts, freak out from adrenaline and anxiety as the undead came at them, or laugh uncontrollably out loud over the ridiculousness of some scenes (specifically the erratic, panicked drive in the desert - hilarious).

And I give the writer props for adding in twist after twist, and not allowing me a breath to figure them out, or see them coming.

Highly entertaining and quite funny, this was a great read. It was great picking up a zombie story that had all the fear factor elements of a good zombie apocalypse, but actually have some great comedy that fit with the storyline. 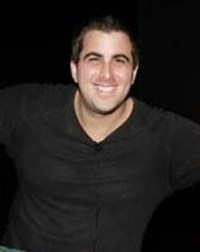 Eric Shapiro's latest book, "Love & Zombies," a manic novella about a Las Vegas zombie kidnapping, came out from DarkFuse on June 16, 2013.
Shapiro's acclaimed 2005 novella, "It's Only Temporary," was on the preliminary ballot for the Bram Stoker Award in Long Fiction. He directed and produced the motion picture, "Rule of Three" (2010), which had its world premiere at the Fantasia Festival and its U.S. Premiere at Fantastic Fest before being released on DVD, iTunes, Xbox, and Netflix Instant. In 2010, Permuted Press published an omnibus collection of Shapiro's first three short novels ("It's Only Temporary," "Days of Allison," and "Strawberry Man") and a handful of selected short stories called "Stories for the End of the World."
His novel, "The Devoted" (2012), from John Skipp's Ravenous Shadows, depicts the last day in the life of a suicide cult, and was nominated for a 2013 Spinetingler Award in the Best Novel: New Voice category.
His debut fiction publication, "Short of a Picnic" (2002), is a collection of short stories about characters grappling with mental illness, rereleased in 2012 by Evil Jester Press.
Shapiro is also known for writing and directing a short film adaptation of Jack Ketchum's story, "Mail Order," which was released as the premiere episode of Fangoria Online's "Screamers" series of short films in March, 2013.
Eric Shapiro lives in Los Angeles with his wife and producing partner, Rhoda Jordan, and their son, Benjamin Shapiro.

Posted by Bookluvrs Haven at 10:35 AM