Well, the move is done, and my Internet connection is up and running. So Monday's post comes a day late, but I finally got it up.  And it couldn't have been on a better book. This novel was EXCELLENT! 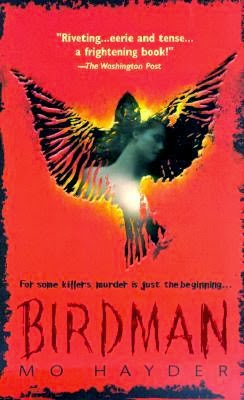 Greenwich, south-east London. The Met's crack murder squad, AMIP, is called out by nervous CID detectives to a grim discovery. Five bodies, all young women, all ritualistically murdered and dumped on wasteland near the Dome. As each post-mortem reveals a singular, horrific signature linking the victims, officers realize that they are on the trail of that most dangerous offender: a sexual serial killer.

Detective Inspector Jack Caffery - young, driven, unshockable - finds himself facing both hostility within the force and echoes of his past in this, his first case with AMIP. Haunted by the memory of a death long ago, he employs every weapon forensic science can offer for he knows it is only a matter of time before this chaotic, sadistic killer strikes again.

This novel and author came highly recommended to me by a friend who loves to read as much as I do. And now I know first hand that all of her gushing praise is really well deserved. I am sad that I did not come across this author until now, but the good news is, she has published quite a few novels and all I have to do is make up for lost time.

Talk about a gritty, dark novel. This story will psychologically mind f@%k you and parts will physically revolt the most seasoned and strong stomached readers of thrillers or horror.  I could not put this novel down. I LOVED it and feel wrong for saying that because of the content.

Jack could not fit the stereotypical washed out, damaged detective any better.  He is in a relationship that he can't wait to get out of.  When he is not thinking and breathing his work, he obsesses over the tragedy of the disappearance of his brother when he was a child, and his quest to get evidence that his neighbor that is the guilty culprit.  His gut instinct is amazing, yet no one takes him seriously at first, even though he is always on the money.

And the killer in this novel?

As far as serial killers go, this one is pretty revolting because of one of his particular tastes.  He is so defiling that it revolted me to the core.  There were some parts in this novel that were hard to get through without a grimace on my face. Yet, this is part of what I loved about this novel.

There is no messing around here.  Mo Hayder goes all the way to deliver a story that doesn't leave any of the details out.  It will shock you, revolt you, and thrill you as Jack gets closer and closer to taking this killer down.

Mo Hayder left school at fifteen. She worked as a barmaid, security guard, film-maker, hostess in a Tokyo club, educational administrator and teacher of English as a foreign language in Asia. She has an MA in film from The American University in Washington DC and an MA in creative writing from Bath Spa University UK.

Posted by Bookluvrs Haven at 1:37 PM