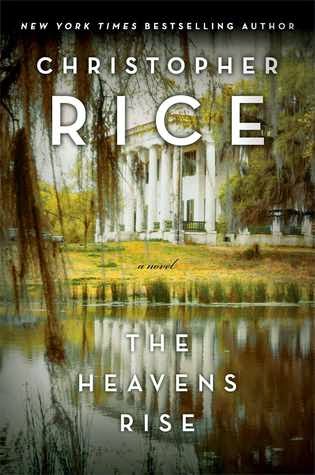 It’s been a decade since the Delongpre family vanished near Bayou Rabineaux, and still no one can explain the events of that dark and sweltering night. No one except Niquette Delongpre, the survivor who ran away from the mangled stretch of guardrail on Highway 22 where the impossible occurred…and kept on running. Who left behind her best friends, Ben and Anthem, to save them from her newfound capacity for destruction…and who alone knows the source of her very bizarre—and very deadly—abilities: an isolated strip of swampland called Elysium.

An accomplished surgeon, Niquette’s father dreamed of transforming the dense acreage surrounded by murky waters into a palatial compound befitting the name his beloved wife gave to it, Elysium: “the final resting place for the heroic and virtuous.” Then, ten years ago, construction workers dug into a long-hidden well, one that snaked down into the deep, black waters of the Louisiana swamp and stirred something that had been there for centuries—a microscopic parasite that perverts the mind and corrupts the body.

Niquette is living proof that things done can’t be undone. Nothing will put her family back together again. And nothing can save her. But as Niquette, Ben, and Anthem uncover the truth of a devastating parasite that has the potential to alter the future of humankind, Niquette grasps the most chilling truths of all: someone else has been infected too. And unlike her, this man is not content to live in the shadows. He is intent to use his newfound powers for one reason only: revenge

Christopher Rice made me lose an afternoon of TV cuddle time with the hubby.

The moment I began this book, I was completely gripped in the pace and originality of this plot line and amazing characters. I turned off the whole world.  Hubby included... He complained a bit, I think... But since I tuned him out for a few hours, I can't really be sure.

The story is told from multiple characters POVs. If it's done right, I LOVE it. It was done right.  Mr. Rice was also very brave, because he didn't stick to the same timeline from character to character, jumping to the past, and back to present. At times, I wasn`t initially sure where on the timeline we were, but he made it work beautifully. The end result? Pieces of the puzzle fit at the right moment, and revelations were timed impeccably.  You also saw the same event from different perspectives, which was so interesting.

The main heroine, Niquette, was absent for most of the novel, which would have ideally sucked if it didn't lend such suspense and mystery to the plot. She was a big piece of the puzzle at different times of the storyline, and it couldn't have been crafted any better in my opinion.

Our main villain? He was definitely not absent, and the darkness of this character was so strong and clear that it disturbed me.  I genuinely felt a sliver of fear every time someone got too close to Marshall... At ALL TIMES it was the worse mistake they ever made.  No conscience, no empathy, and a thirst for revenge and chaos... combined with super powers... (shudder) He terrified me.

Sounds like it should be an easy 5 star, but sadly, I really didn't like the conclusion! Ugh I know!! This is just my personal opinion though...  The big reveal jumped the shark for me!  I went into a place of disbelief and incredulity.  I wanted a different conclusion that explained things a little better, and involved a happier ending for a few of the characters involved.  But I know this is the author's vision and not mine.

It WAS a great vision, filled with originality and believable characters in a really weird situation.  The author captured believable emotion and projected it from the pages.  And that takes a lot of talent, and I have nothing but appreciation for his efforts.  I look forward to curling up with another of his books, creepy and all.

*I received a eBook copy of this book for free to review from the author/publisher through Netgalley; this in no way influenced my review, all opinions are 100% honest and my own.* By the age of 30, Christopher Rice had published four New York Times bestselling thrillers, received a Lambda Literary Award and been declared one of People Magazine’s Sexiest Men Alive. His first supernatural thriller, THE HEAVENS RISE, was nominated for a Bram Stoker Award. His first novel, A DENSITY OF SOULS, was published when he was just 22. The controversial bestseller was greeted with a landslide of media attention, much of it due the fact that Rice’s mother is a legendary vampire chronicler who shares his last name. (He recently published new e-book editions of A DENSITY OF SOULS and his second novel, THE SNOW GARDEN, which contain intimate afterwords.) He served as a contributing columnist to The Advocate for many years and his additional criticisms and witticisms have been featured in The Washington Post, Salon.com, The Daily Beast and his own Facebook page, which currently hails over 140,000 subscribers. The members of the InsightOut Book Club selected his novel BLIND FALL as one of the best novels of 2008, and his noir thriller LIGHT BEFORE DAY was hailed as a “book of the year” by mega-best selling thriller novelist (and Jack Reacher creator), Lee Child. Together with his best friend, bestselling novelist Eric Shaw Quinn, Christopher recently launched his popular Internet radio show, THE DINNER PARTY SHOW WITH CHRISTOPHER RICE & ERIC SHAW QUINN; the show is always on at www.TheDinnerPartyShow.com!


Posted by Bookluvrs Haven at 7:30 AM