Netgalley Review - Mine to Take, by Cynthia Eden 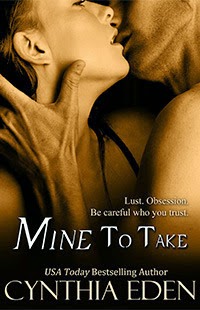 Skye Sullivan knows that someone is watching her. Not just watching—stalking her. Months ago, Skye was involved in a dangerous car accident. The accident ended her dancing career and sent her fleeing back to Chicago. Skye is convinced that her stalker caused the crash, and she fears that he won’t stop pursuing her, not until she’s dead.

When someone breaks into her apartment in Chicago, Skye turns to the one man she believes can protect her—Trace Weston. Once, Trace was her lover. Two lost souls, they’d come together in a firestorm of need and desire. But then Trace had pushed her away. He’d joined the military, vanishing from her life. She’d put all of her emotion into dancing, and she’d tried to forget him.

Now Trace is one of the most successful men in the United States. Rich, driven, and carrying dark secrets, he agrees to help Skye. He’ll protect her from the danger that lurks in the darkness, but Trace wants more than to just be a guard for Skye.

He wants her. And he’ll take her. The years have changed him, hardened him. He’s not just a poor kid from the streets any longer. Now, he can have anything—or anyone—that he wants. And the one woman he has always wanted has just come back into his life. He won’t let her go again.

But with the threats mounting against Skye, she suspects that her stalker may be intimately close. He’s a man who knows her too well. As his attacks grow ever more dangerous, she realizes that if she trusts the wrong man, she could be making a fatal mistake.

Just how far would you go in order to possess the one person you want the most?

Author's Note: MINE TO TAKE is a sexy romantic suspense novella—it contains approximately 41,000 words. MINE TO TAKE is intended for adults. Sexy situations and adult language will be found within the pages of this story—please consider yourself warned

This is a surprise 5 star, as I began this short novel not really expecting much more than a sexy novel that would have been easily forgotten.  But this was no such thing.

You want sexy? Yes you got sexy. Burning hot sexy.

And what an action packed story line this was, with a few twists and turns that I did not predict. That is what I loved most. I honestly thought Skye's stalker was one person, and it turned out to be someone else and I didn't even see it coming until the last clues began to tie together.

In a recent sea of predictable literary adventures over the last year, this was finally the breath of fresh air that I was craving, served in a relatively short novel, so I read it comfortably in one sitting. It didn't need to be longer, because the author was excellent at world and character building. The only thing that I need more of... is more of Cynthia Eden's books. Which I will definitely be exploring in the near future.

As an added BONUS, at the time of this post, this was FREE on Amazon. To check to see if it is still FREE please click on the Amazon link above and grab it for yourself!

*I received a eBook copy of this book for free to review from the author/publisher through Netgalley; this in no way influenced my review, all opinions are 100% honest and my own.* 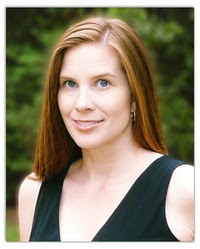 About this Author
New York Times and USA Today best-selling author Cynthia Eden has written over thirty novels and novellas. She was named as a 2013 RITA® finalist for her paranormal romance, ANGEL IN CHAINS, and, in 2011, Cynthia Eden was a RITA finalist for her romantic suspense, DEADLY FEAR.
Cynthia is a southern girl who loves horror movies, chocolate, and happy endings. She has always wanted to write (don't most authors say that?), and particularly enjoys creating stories about monsters-vampires, werewolves, and even the real-life monsters who populate her romantic suspense stories.
Author Links: Goodreads / Website / Twitter