Today I will be reviewing two new publications from Netgalley, Gather the Daughters and Zero Repeat Forever. I broke my vow for 2017 of not making any more NG requests for these two books. I was SOOOOO excited to read these two books and they didn't disappoint. 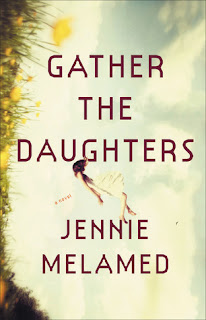 GATHER THE DAUGHTERS is a haunting story of an isolated island cult for fans of THE HANDMAID'S TALE, THE GIRLS and THE POWER. 'An intriguing, gorgeously realised and written novel which inexorably draws you into its dark heart' Kate HamerOn a small isolated island, there's a community that lives by its own rules. Boys grow up knowing they will one day reign inside and outside the home, while girls know they will be married and pregnant within moments of hitting womanhood. But before that time comes, there is an island ritual that offers children an exhilarating reprieve. Every summer they are turned out onto their doorsteps to roam wild: they run, they fight, they sleep on the beach and build camps in trees. They are free. It is at the end of one of these summers, as the first frost laces the ground, that one of the younger girls witnesses something she was never supposed to see. And she returns home, muddy and terrified, clutching in her small hand a truth that could unravel their carefully constructed island world forever.

A friend of mine, who is a teacher, is the one that pointed me to this book, late this summer. She was really enjoying this book, stating that it was as good as The Handmaid's Tale and it was quite dark, which she loved. High praise! I was THRILLED that I was approved to receive a digital copy of this novel for review from Netgalley and dove right into it shortly after.

It was certainly enthralling, and very hard to put down. I was definitely revolted by one of the 'normal' parts of the culture of this little secluded society, as it is very TABOO in our normal world. I immediately began to doubt whether anything had actually happened to the world outside, or if a chosen few decided that they wanted to start over somewhere where they can make up their own dirty rules... What bothered me even more was that there was no explanation as to why this would even be part of normal life, whether some men agreed with it or not.

It was an equally sad and intriguing tale, which never really reaches conclusions to any of the questions I had as a reader... yet I was not turned off by that, and was fine, for once, with using my own imagination in coming up with theories on what happens to some characters, or what may have happened to the outside world, if anything. I also enjoyed the changing POVs of different characters of different ages. Some sounded so adult, but then life was tough for these girls, and I imagine that they grew up very quickly living in this type of society.

As tough and revolting parts of this book were to read, I thoroughly enjoyed this story for the disturbing and intriguing tale it was. As long as you can handle dark content, even if mostly implied vs detailed, I would certainly recommend this novel.

The 5th Wave meets Beauty and the Beast in this fast-paced and heart-stopping novel about an invasion of murderous creatures and one girl fighting for her life at the end of the world.

He has no voice or name, only a rank, Eighth. He doesn’t know the details of the mission, only the directives that hum in his mind.
Dart the humans. Leave them where they fall.
His job is to protect his Offside. Let her do the shooting.
Until a human kills her…

Sixteen-year-old Raven is at summer camp when the terrifying armored Nahx invade. Isolated in the wilderness, Raven and her fellow campers can only stay put. Await rescue. Raven doesn’t like feeling helpless, but what choice does she have?

Then a Nahx kills her boyfriend.

Thrown together in a violent, unfamiliar world, Eighth and Raven should feel only hate and fear. But when Raven is injured, and Eighth deserts his unit, their survival comes to depend on trusting each other…

Though, in my opinion,  the movie did not measure up, I absolutely loved reading The 5th Wave. How could I possibly resist a book that is being compared to it? I just couldn't! In my mind, if you are going to make this kind of claim, it better be good!

I can definitely see the similarities to The 5th Wave, but by no means was it a clone of that novel. This book definitely stands on its own. Plot had some originality, and the characters were well fleshed out, intriguing and engaging... even the nasty ones.

This was another book that did not disappoint. It was absolutely action packed, and filled with plot lines that were pretty powerful and emotional. I was insanely invested in some of these characters, and I could not have sympathized with our Nahx "bad guy" more if I tried. My heart literally went out to him, and hoped that he would find a place to fit in... even though that seemed so impossible.

I really look forward to continuing the series. The part that sucks the most is having to wait for the next installment.