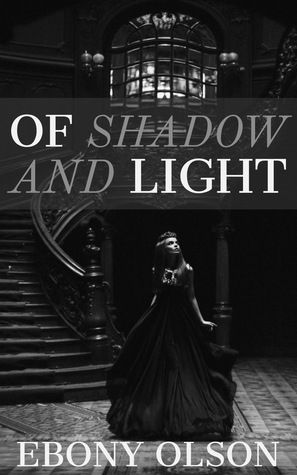 
She will be the one to take his coldness,

She will unveil the Unseelie darkness and show them light.

She will unite what should never have broken.

The daughter of the moon will teach him love and the radiance of the sun.

Her inner light will purify the tainted ones,

And she will guide the fey by wisp-light.

‘Prophecy of the Dark Prince’

Messina Doe was just looking for a warm place to spend the night. What she discovers is a place the human race had long ago buried and forgotten.

The dark Fey haven’t forgotten humans. The throne room of the Unseelie court is the hottest underground nightclub around, but if you step through the wrong door, there is no going back.

No one ever escapes. Never. 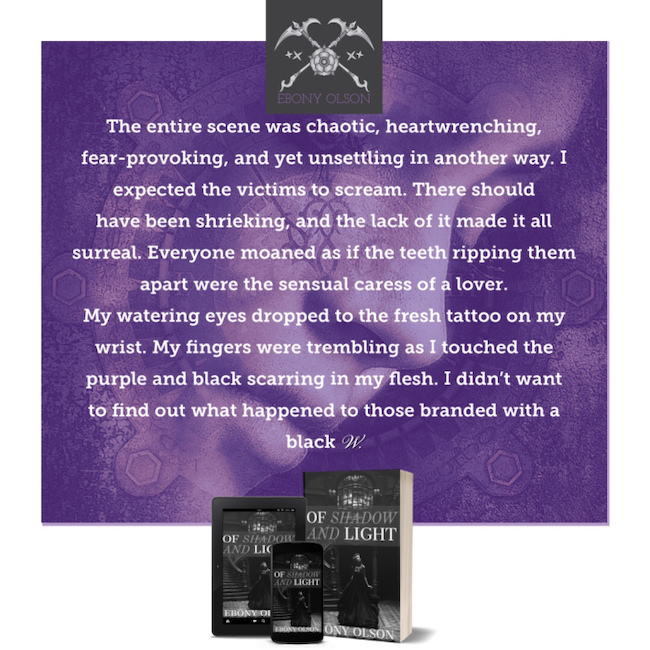 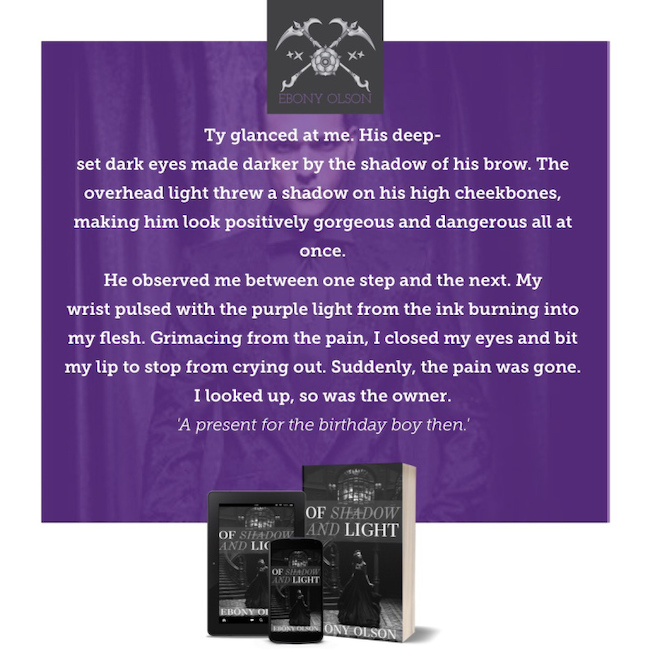 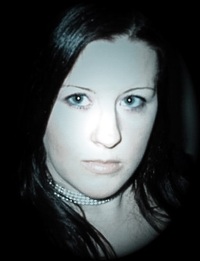 
Ebony lives in Sydney, Australia, with her husband, daughter, and six cats. She loves to read fantasy, thrillers, and paranormal romance, spending most of her free time with her nose in a book or writing.

Having always possessed an over-active imagination she spent her younger years regaling friends with fantastic stories, holding her audience captive with the passion and suspense of her characters plights.

Now in adulthood, she has numerous published works and shows no signs of stopping her imagination from spreading across as many pages as it can find. 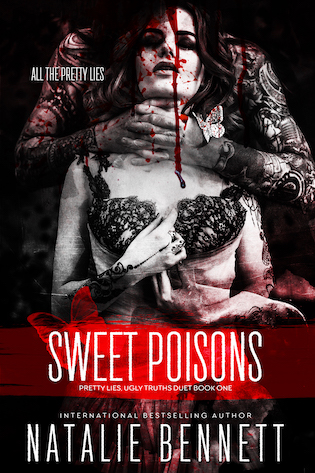 He was the type mother’s warned their little girls about—a cocky, rich asshole with a pretty smile, unapologetically insane and wild.

I was the type guys like him usually ignored—a free spirit who hid my crazy beneath an odd good girl facade, and the art hanging on my studio walls.

We were opposites in every way but one, and we collided like two runaway trains that never had a chance of stopping.

What blossomed between us, our ‘relationship’, was maniacal.

We got stuck in a cycle of madness.

Rhett Sullivan became a bittersweet poison I couldn’t get enough of.

In the end, that’s what destroyed me.

Because in the end?

Our love was nothing but a lie.


I said I was done slapping warning labels on my book babies this year, but since I have never written full on NA yet, I’m going to give a tiny one now. This will be the only label this duet will have. If you are not a fan of twisted stories that deal with dark themes, rich assholes, and lots of filthy sex, this will not appeal to you. This couple is not unicorns and rainbows and neither is their story. 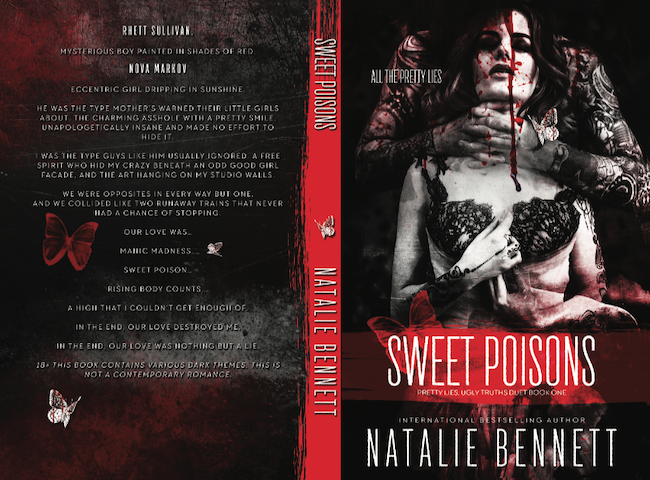 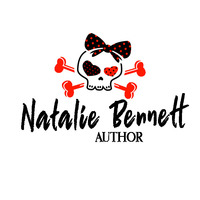 
Natalie Bennett is your average socially awkward author that turns her spontaneous head ramblings into stories.
She has a penchant for writing about villainous immoral men, crazed anti-heroines, and tends to deviate away from traditional HEA's.
She likes chocolate, Netflix, and Prickly Pear Margaritas.
When she isn't writing she's hanging out with her husband and their three (adorable) spawns. 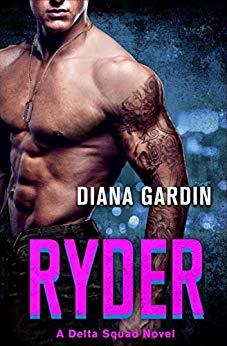 Since Valentine's Day was around the corner, I was in the mood for a romance. And not just any romance. The kind that makes your heart pitter patter because the guy in the novel is strong, rough, protective kind of male that most of us kind of yearn for (let's be honest here!)

Ryder seemed to fit the bill for all the wants on the list. And he certainly checked off all the criteria above. He was very strong, rough and very protective of the woman he cared about.
Frannie used to succuum to the wishes and wants of her ex-husband. His suceptability to violence against her made it an incentive for her to always please him, but his level of paranoia in her faithfulness made every effort she made useless. When he almost killed their unborn child and landed her in the hospital, she had had enough. She made the decision to finally leave, but needed protection, as her ex-husband lived in a much darker world than she even imagined.

What I enjoyed about Frannie was how she rose from the situation so strong and determined to escape her ex, and learn to take care of herself. She was still frightened of the man, but she wasn't going to allow him to take up one more minute of her life. I don't believe that she was looking for anyone else to be a part of her life, and she sure was believably surprised at the feelings she developed for Ryder when in protection with him as her guard.

On the sizzle meter, this book was up there, however, their chemistry was a bit abrupt. It was neither an immediate lustful connection that entwined them together, nor did it seem to be the slow burning kind that builds up a level of anticipation even in the reader. It was a flip of the switch kind of situation, and once they were physical, they connected. The forementioned two scenarios are much more to my liking. This instant switch didn't do it for me. That being said, once they 'hooked up', their emotional build up was satisfying.

This novel follows the classic romance formula, so of course you have some conflict at the end with the bad guy. It all concluded in the expected satisfying way, and once again, love conquered all. All the right fuzzies just in time for Valentine’s Day, which is around the time I started the book.

Posted by Bookluvrs Haven at 11:53 AM No comments: Links to this post

Book Reviews - The two novels that let me down.

Well past the first quarter of the year, and already 1 star reviews.

It is not often that I fail at choosing the right books. I can assure you that the last thing I do is purposely read books that I think I would dislike. So 1 star reviews are not the usual thing for me, but it occasionally happens.

I recently started two books that I was given access to from Netgalley, and though I couldn't quite believe it, I had to make the decision to drop them because I was not enjoying them. So here are my thoughts on these two books that I had to DNF. 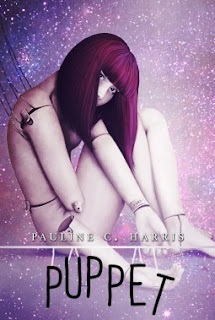 Add to Goodreads
Review:
Those that have followed me for some time know that I love reading fairytale retellings. So no surprise here that I would be happy to pick up a book that labelled itself a retelling of Pinocchio. Not my most favorite of fairy tales, but I was excited about it nonetheless.
Well, folks, this was a bit of a let down. It was bit like Pinocchio I guess, in the loosest of terms, and backwards! Jed wasn't interested in turning a marionette into a human girl, but turning a human girl into a marionette. And for the first part of this book, that is all that it was focused on. Characters were dull and had no substance. They were underdeveloped as was everything else in the story. Not sure where they were, whether it was set in a futuristic society or not... the synopsis claims this story is set in a world of advanced technology, yet there was very little of the actual world in what I read.
This story felt like it could have had much potential but the foundation was cracked and crumbling. The world buildup can be as important to holding a reader, as the set up of characters and plot, and that too was not as strong as I had hoped it would be.
Unfortunately, this was not the right retelling for me. 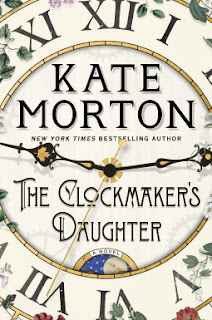 Add to Goodreads
Review:
Never, ever, ever did I think that I would ever 1 star one of Kate Morton's novels, nevermind DNF one. This took me aback, and I had put this book down, thinking that maybe I just wasn't in the mood for it and later picked it up again... but to no avail. It was torturous to continue for another 5% and felt like I was forcing myself to read even that much.
Glad that I am in the minority here, because I really enjoy Morton's novels so far, and maybe it was me and not her writing. In this case, I was equal parts bored and confused. I had no clue whose POV I was reading some of the time. And when I was reading Elodie's POV, the amount of detail over minute things would overshadow the mystery of the bag and sketch book that had her so enthralled.
I no longer push myself to be the kind of reader that forces herself to finish a book she is not enjoying, for a review or not. In every author that I have loved, there has always been the one book that leaves me dissatisfied and scratching my head, and I hope that this one is the only one of Kate Morton's that doesn't appeal to me. I hope the next one I read from her affirms why I love reading her novels so much.
Have you had any 1 star reads this year so far? What was missing for you? Are you the kind of reader that keeps on reading even if you are not enjoying the story? Let me know in the comments. I am always curious about other fellow readers thoughts and habits.

Posted by Bookluvrs Haven at 3:05 PM No comments: Links to this post