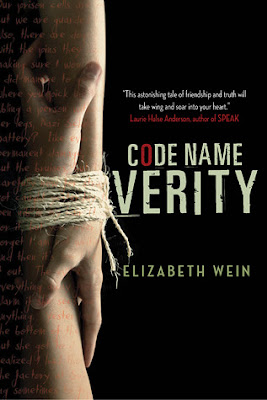 Published May 15th 2012 by Doubleday Canada


Oct. 11th, 1943--A British spy plane crashes in Nazi-occupied France. Its pilot and passenger are best friends. One of the girls has a chance at survival. The other has lost the game before it's barely begun.

When "Verity" is arrested by the Gestapo, she's sure she doesn't stand a chance. As a secret agent captured in enemy territory, she's living a spy's worst nightmare. Her Nazi interrogators give her a simple choice: reveal her mission or face a grisly execution.
As she intricately weaves her confession, Verity uncovers her past, how she became friends with the pilot Maddie, and why she left Maddie in the wrecked fuselage of their plane. On each new scrap of paper, Verity battles for her life, confronting her views on courage and failure and her desperate hope to make it home. But will trading her secrets be enough to save her from the enemy?


I usually stay clear of war stories. With the exception of "War Horse", I skip them. It's just not my cup of tea.

Though I try not to judge a book by its cover, this one did catch my eye. It speaks a thousand words. And the blurb of the novel did seal the deal on giving this one a chance. I am glad that I did.

Verity's voice in the beginning of this novel instantly reeled me in. She became a war prisoner of the Gestapo in WW2, and forced to write her confession day after day. Her voice was funny, filled with sarcastic humor, and even in the midst of such a horrid situation, she made me laugh at her rebellious antics towards her captors. She was human. Defiant. Strong and so brave. She was difficult to ignore and not love.

In the way of these "journal entries" which were read every day by her captors, she weaves the story of her deep friendship with Maddie, a pilot she worked with throughout the war.

The second part of this novel is told through Maddie's voice and she is no less likeable, and no less brave.  Thinking of nothing but trying to find her friend and rescue her. It is difficult to write anything more without giving away the plot.

Saying that this is the best WW2 book I have ever read maybe doesn't indicate much considering that I don't really read this genre.  For a reader that doesn't venture into these type of novels, and to give this book a four star review may indicate a lot.

I love that this book focused on two normal girls that joined the war, and fought behind enemy lines. And I loved that they were good at what they did and very much respected. There are no happy endings in war, and it translates true with this novel. Though I can not say with all honesty that this was an original type of war story, I can most certainly say that it is forever memorable. Highly recommended!

This novel was kindly provided by the publisher via

Elizabeth Wein has lived in Scotland for over ten years and wrote nearly all her novels there.  Her first five books for young adults are set in Arthurian Britain and sixth century Ethiopia.  The most recent of these form the sequence The Mark of Solomon, published in two parts as The Lion Hunter (2007) and The Empty Kingdom (2008).  The Lion Hunter was short-listed for the Andre Norton Award for Best Young Adult Fantasy and Science Fiction in 2008.  Elizabeth also writes short stories.


You can find her on Goodreads, or check out her Website.