Erin`s Review of The Sixth Sense, by Lawrence W. Gold 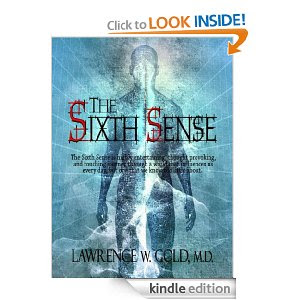 Brier Hospital Series: Arnie Roth, a family practitioner, develops viral encephalitis. He awakens from the near-death experience with a new appreciation for life and an unexpected talent, his sensitivity to smell has increased a thousandfold. The Sixth Sense is highly entertaining, thought provoking, and touching journey through a world that influences us every day, but one that we know too little about.

This was a great novel, unlike anything I have ever read before.  I love books about medicine.  Medicine is fascinating, and Dr. Lawrence W. Gold has brought a whole new aspect to it.

The story captured me from the very beginning, there were a lot of characters, but the development was strong, which made it very easy for follow along.

There was a lot of medical terminology which I eat up, but there was a twist to this one.  The main character, Arnie is a MD who develops a viral infection and nearly dies, though when he wakes up he has super human smelling...seems cool right?  It totally does until you read the story and become aware of what it would really do to you, you feel sympathy for Arnie and his family.

A book of a lot of twists and turns, this one will pull you in and not let you go!

I can't wait to read some of Dr. Gold's other novels.

After graduating from Valley Stream Central High School, I graduated from Adelphi (class of 1961), a college then, a university now, and then to medical school in Chicago. The war in Vietnam interrupted my postgraduate training with a year in Colorado Springs and another as a Battalion Surgeon in Vietnam. I spent seven months in the Central Highlands with the 4th Infantry and five months in an evacuation hospital in Long Binh outside Saigon where I ran the emergency room. I returned intact in 1968 to complete my training in internal medicine and diseases of the kidney, nephrology. I worked for twenty-three years in Berkeley, California in a hospital-based practice caring for patients with complicated illnesses often in ICU and served as Chief of Medicine. My wife Dorlis and I retired in October 1995 and sailed under the Golden Gate Bridge for a life at sea in Mexico, Central America, and the Caribbean. Four years later, exhausted from repairing everything on board, (often many times) we sold the sailboat and within a year took the lazy man’s out; we bought a Nordic Tug, a trawler. We motored around Florida, the Bahamas, the entire East Coast and completed two ‘Circle trips’ to Canada and back, eight months, the first time, five months, the second. I wrote professionally as a physician to inform but rarely to entertain, at least not on purpose. First, Do No Harm was published in April 2007, No Cure for Murder, the original version, was released in August 2011, and For the Love of God in January 2012 (all available in print and Kindle). In the last two years, I’ve written three screenplays based on my novels and hope to see one or more produced for the screen. I submitted my screenplay, Rage to the 80th Annual Writer’s Digest contest and won honorable mention (57 out of 11,000). We live in the California Sierras in beautiful Grass Valley with 13 year old Mike, a terrier mix and Bennie, a 7 year old purebred Yorkie who, looks like he’s on steroids.