Erin's Review of Willow Pond, by Carol Tibaldi - A Pump up your Books Blog Tour Stop 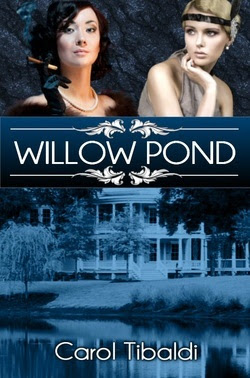 The Roaring Twenties crumble into the Great Depression, but Virginia Kingsley, New York's toughest and most successful speakeasy owner, is doing just fine. Now that the world is falling apart, bootlegging is a flourishing business, and she's queen of that castle.


Then her infant nephew is kidnapped. Her niece, Laura, and Laura's philandering movie star husband, are devastated. The police have few leads, and speculation and rumors abound in the media circus that follows the celebrity abduction.

Little Todd's absence shapes everyone's lives. When he is finally found, the discovery will bring disaster for some and revelation for others.

Willow Pond is certainly a roller coaster of a book.  Carol Tibaldi really gets the reader invested in the characters, which is fantastic...and always the first thing I mention in a review, because it is so important for me to think a book is good.

I admit, I am not fond of reading books that take place in the past, I am more of a modern day reader.  So I found the book started off a little bit slow, but as I continued to read, it became harder and harder to put down.

There was a lot of emotion in this one, and of course you would expect that when a child is kidnapped. The main plot of the story is about the little boy who is kidnapped, but there were a lot of small subplots that kept the reader intrigued.  Not only was their sadness, anger, deceit and loss...but there was equally love, hope and happiness....which I always find makes a good book.

I thought the story dragged on a little bit in spots, but it ended up getting to where it needed to go, while making me fall in love with some of the characters, in particular the reporter Erich.  I don't know what exactly it was about him that made me so drawn in, maybe it was his sweetness, his complete adoration and love for Laura, or how much he loves his little girl...something made me swoon....and of course the ending certainly didn't disappoint.

If you enjoy a good mystery set in the roaring twenties, than this book is definitely for you!!

Carol Tibaldi was born and raised in Bayside, New York and attended Queens College of the City University of New York. She loves to travel and has lived in London and Los Angeles. For twenty five years she worked as a newspaper reporter and covered the crime beat. She is a history buff and loves to research different time periods having a special affinity of the prohibition era and the Civil War. Willow Pond is her first novel and she is hard at work on the sequel.

What People Are Saying About Willow Pond:

"I found suspense, lies and love all wrapped up in this wonderful story. I anxiously await your next book and am sure this one will be a winner." --Shelly Itkin

"Willow Pond is a treasure to read. Tibaldi is a first-time author who has made an indelible mark with her debut novel." eNovel Reviews

"Carol Tibaldi, with surprise twists, a plot that flows perfectly and great characters you can connect with had me hooked from the beginning." --Laura Thomas

KayleeeKS says~   5 stars!  I was hooked literally from the first sentence:
“I was hooked literally from the first sentence: “Laura Kingsley Austin was Jean Harlow beautiful.” What a great opening line that does so much in so few words! I already pictured the character perfectly and felt an immediate sense of being transported into another time and place. Tibaldi does a fabulous job of “showing” the story instead of “telling” – providing the reader with enough details on the era to remind us of where and when we are, while allowing the story to unfold at a natural, brisk pace. I have to admit I am a huge fan of the short chapters as it keeps me rapidly turning the pages for “just a little bit more”…and before I know it, I’m done! I liked the romance between Erich and Laura, but felt it took a backstage to the other relationships in this book, mainly the one between Laura and Virginia (which was great!) And Laura and her ex-husband Phillip, the famous movie star and father of her missing son. If you like a story with mystery, twists, unexpected surprises and a riveting plot, then this is one you definitely don’t want to miss.”

Posted by Bookluvrs Haven at 3:00 AM