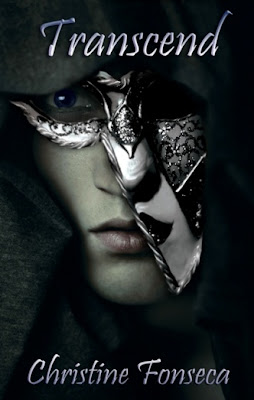 All seventeen-year-old composer Ien Montgomery desires is an escape from his family's rigid expectations for his life; someone to inspire his music. When he meets a beautiful violin-prodigy, Kiera McDougal, his life music takes on new life. With her, he imagines a future outside of his parents’ control. That is, until a horrible accident tears them apart. Sent to die in a sanatorium, Ien’s obsession for Kiera grows unbearable. Tortured by thoughts he can’t escape and the truth of his monstrous disfigurement, he flees, desperate to exact revenge on the people that ruined his life – his parents. But, vengeance is empty. Betrayed by those closest to him, Ien discovers that the price for his happiness may be his sanity. Set amidst the landscape of New York's Gilded Age, and inspired by Phantom of the Opera, TRANSCEND exposes the fine line between love and madness.

This book left me feeling exhausted and utterly ragged.

First - I barely slept while trying to finish this novel. My fault... No! Christine Fonseca's fault! I just couldn't put this down!

Second - There was so much angst in this novel and I had a really hard time knowing what was truth and what wasn't...

But then, neither did our character.  Madness must be exhausting...

The book synopsis indicates this story was inspired by Phantom of the Opera. So I really wanted to read this based on that alone. I am a HUGE Phantom fan. And I have picked up a novel or two that was inspired by that classic tale before and been thrilled with each novel so far.

This is a whole other unexpected beast though. Music is indeed a part of this story, and there are some obvious similarities, but I found this story so much darker!  And for a YA novel, I didn't think that would be possible!

Ien is a character that, even through his most vengeful moments, pulled at my heart strings. He was filled with love, and rage, and the sense for revenge because he felt betrayed by the people he loved and trusted the most.  He brought tears to my eyes. First because of how he felt when he realized his disfigurement. Then, when everything he wanted was taken away from him. Then when he found out, that what was taken away, was never his to begin with.

This story is dark and abysmal but I am not surprised by the gushing reviews on this book so far.  I really enjoyed this novel. That voice of madness that was Ien was just so believable, I have often wondered how the author captured it so vividly. It was stunning, and so multi-layered, yet it all came together to an ending that I kind of predicted, but was shocking nonetheless only because I wanted it to be different for poor Ien.

This is my first novel by Christine Fonseca, though I have had Lacrimosa on my to read list for months. I will not delay much longer in reading another of her novels.

Hey! Wait! Before you go you need to enter this GIVEAWAY! Yippeee!

School psychologist by day, critically acclaimed YA and nonfiction author by night, Christine Fonseca believes that writing is a great way to explore humanity. Her many titles include TRANSCEND, DIES IRAE, LACRIMOSA, MEA CULPA, and in nonfiction: 101 SUCCESS SECRETS FOR GIFTED KIDS and EMOTIONAL INTENSITY IN GIFTED STUDENTS.
When she’s not writing or spending time with her family, she can be sipping too many skinny vanilla lattes at her favorite coffee house or playing around on Facebook and Twitter. Catch her daily thoughts about writing and life on her blog.
For more information about Christine Fonseca or the series, visit her website – http://christinefonseca.com or her blog http://christinefonseca.blogspot.com.