It has been an awesome month filled with creepy, or downright scary reads and lots of giveaways. Thank you all for visiting and participating, and congratulations to all of our winners this month!

Leaving the month of October with just one short story itty bittie! November is super packed, so I had to start my November reads this past week. Not to mention, need to catch up on a couple of reads that I really wanted to get to but wasn't able to fit into October like I hoped.

Check out the last review of the month! 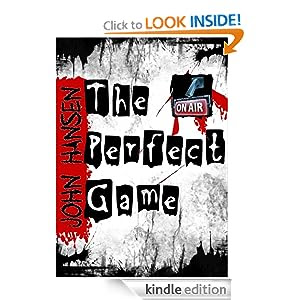 
Entertainment is changing forever. Comedies, dramas, and reality TV shows are out. Murder is in.
In a world where murder is being exploited on TV, viewers watch live assassinations for their own entertainment. A hit game show where the challenge is to kill arises, stirring up remarkable popularity. Millions of viewers all across the globe watch it, vicariously experiencing the thrill of murder without ever committing the crime. And they all love it. Murder is the world’s latest and most remarkable excitement turned entertainment. But what happens when it goes too far?

﻿Alrighty folks. This was a cool 14 page story. Without giving even the smallest hint away, I absolutely loved the ending, though I don't condone in any way, the actions people took in this book. It was just an ironic twist that I enjoyed.

I did have an issue with believability. If there was mention that we were in a world setting where culture had changed, and this kind of tv was acceptable, I would have been more convinced. There is mention that officials may be receiving bribes to air this murder show, but it didn't sound believable to me that something like this would fly, week after week.

But, after all, it is just a story. And it was an interesting one. For the ending alone, I recommend you check it out. I got this one during a free promotion on Amazon, but I believe it is normally priced at .99.

Posted by Bookluvrs Haven at 10:52 AM