Review of 'Duty and the Beast', by Trish Morey 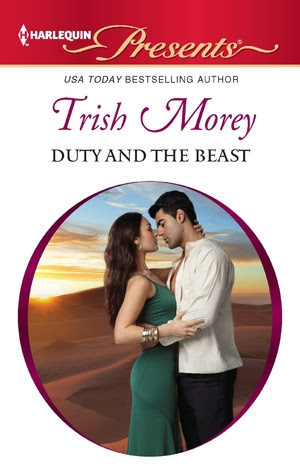 Goodreads Blurb: Rescued from the clutches of a lascivious prince, Princess Aisha Peshwah quickly realizes she's jumped out of the frying pan and headfirst into the fire. Her rescuer is Zoltan Al Farouk bin Shamal—an unashamed barbarian!—who must marry Aisha himself to ensure he is crowned king.Commanding, stern and brutally attractive, Zoltan is as untamed as the desert he will be master of. Aisha wants to resist, but is drawn to this enigmatic man, and soon her innocent body begins to unravel beneath his powerful possession.

I know this read is a little out of genre norm of YA and zombie fiction that has been the ongoing theme lately on the blog, but I really needed a little quick, escape read. One that is filled with action, conflict and a whole lot of romance.  This Harlequin novel had all I was looking for.


I've read plenty of Harlequins over the years, and usually I really enjoy the stories. They usually follow the same formula; boy meets girl, sometimes they don't really like each other at first, but there is always a spark between them. Fairly quickly, boy and girl fall hopelessly in love, but may or may not be open with how intense their emotions are. Hot sex is involved. Yum. Then, behold! A conflict arises that separates the lovers... but their love for each other is so strong, they can't stay away from each other. And they live happily ever after, and unicorns shit strawberry scented rainbows. I love it! I love those happy endings, and ending scenes filled with love erupting from their pores.

I know that this novel centered in modern times, but it didn't feel modern. I had to keep reminding myself of the actual time in this novel. The Arab customs of this story, with royalty being involved, and arranged marriages felt like it belonged in an older time. But I understand those customs are still very much alive today, so it's not from ignorance on my part. Being from a different culture those types of customs are not common or expected, is what made me constantly remind myself that this was a present time novel. I enjoyed that it was centered around a different culture and it was a much more interesting story to read for me because of it. Even though the core story has been done a hundred, thousand times, this was a cool setting.

The female character, Princess Aisha, was constantly accused of being a selfish brat. But the writer did not portray her that way. As a reader, you have the luxury of reading from her perspective and from his. What made her bratty, was evidently her way of trying to gain what she felt was a semblance of control when she really had none. The life changing choices were made by her father, and it was on her shoulders to uphold custom and make her family and nation proud. On the other hand, Zoltan was also accused of being a 'barbarian', and yes he was cold at times, and impossible, but this was also an unwelcome situation for him, but he too had a part to play out of duty. He definitely needed some help in the romance department, and I am glad that he got that much needed advice from one of his closest friends. Both Zoltan and Aisha got along a lot better when he followed his friend's advice... much to the pleasure of both, and swooning me, who devoured this novel waiting for that happy ending that I knew was coming.

Well written and interesting, this novel was just the break I needed from all the darker books I have been reading lately. I was starting to feel like I was in a rut reading the same high action, gory stuff. 'Duty and the Beast' gave me a little battery charge with the nice feeling that accompanies finishing a great romance with that expected heart warming ending.

*I received a eBook copy of this book for free to review from the publisher via Netgalley; this in no way influenced my review, all opinions are 100% honest and my own.*