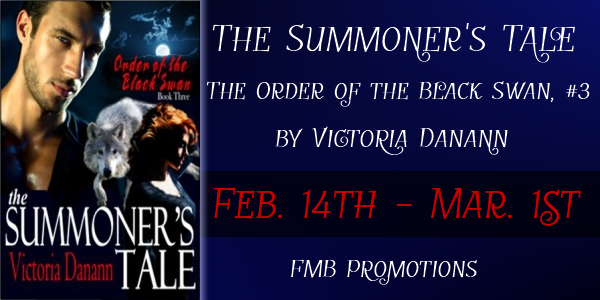 Hi everyone! Today we are showcasing book #3 of The Order of the Black Swan Series by author Victoria Danann, courtesy of FMB Promotions. To help celebrate this new release, there is also a tour wide giveaway for a couple of book titles by this author! Please enter for a chance to win!

Please also check out the rest of the tour for a variety of posts from some awesome bloggers, by clicking here!

You can get a sneak peak of this novel by clicking on 'read more' below, as we have excerpt of Chapter One!

As always, thank you for stopping in today. 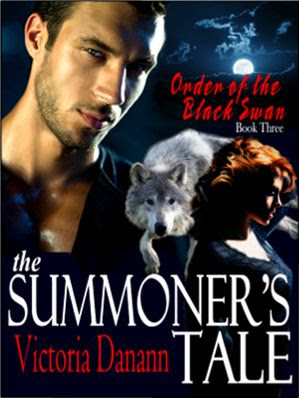 A secret society, a witch, a psychic, vampires, modern day knights, heroes, elves, fae, assassins from another dimension, and fairytales come together where emotions intersect. Two souls, joined by a mystical bond, separated by distance, must simultaneously struggle through pain and darkness in an ultimate confrontation with character and an ultimate struggle for life proving that true love waits patiently through lifetimes and finds courage to survive. Even in the strangest places. Even when you're least expecting it. Even when you're far, far from home.

The plural of vampire is vampire.

When the rush of activity subsided, he found himself alone with his own thoughts; a condition that was more than familiar since he had spent hundreds of years that way. Without the distraction of his friends' banter, since his proposed staff had left Edinburgh, he had begun to see his task not just as a job, but as a mission, one immersed in the duality of joy and gravity.

He had never considered himself to be impatient. Quite the contrary, everything he had ever pursued in earnest, from painting to music to writing, had depended upon patience. But, his cognizance of the enormity of the burden he had accepted had grown over the past months and he had turned to brooding about the time that was passing.

Every day that nothing was accomplished was a day when more people had their humanity taken from them, another day when vampire remained imprisoned in bodies infected with the foulest disease imaginable, and, also, another day when people died.

The project was moving painfully slowly. Everyone who had originally been assigned to work with Baka was gone: married, retired, whatever. Everyone except Heaven - who had turned out to be anything but.

The large work space, intended for several people, seemed deserted with him alone most of the time. He worked from early in the morning till late at night, challenging both the hours in the day and the fact that he was one excruciatingly short-handed task force leader.

When Heaven was present, her moods ran the range of a shallow bell curve from disagreeable to surly to sullen. He admitted that he had provoked her on their first meeting, for reasons that were a mystery to him. Something about her instantly put him on edge and made him feel anxious.

Even though that feeling persisted, he had attempted to make amends so that they could work together amicably. To no avail. She was prickly to the core, spurning every effort on his part to develop a rudimentary standard of civility. She behaved as if simple courtesy was more than she could manage which meant that "nice" was a goal way too distant.

He not only had to work with a person who detested his very presence, but, adding insult to injury, it seemed he couldn't shake an inexplicably strong attraction to her. He found himself staring at the curve of her cheek with her head bowed over work. Or the shine of her chestnut hair when she walked through a ray of light. Or the way her lips pursed whenever he gave her something to do. It was damned aggravating.

To make matters worse, he seemed to have lost interest in pursuing other women.

At exactly fifteen after five she double checked her wristwatch, closed an open folder, rose, pushed her arms into her sweater jacket, put her purse on her shoulder and, like every other day, walked out of the office without saying goodnight.

He perpetually struggled to concentrate because the space seemed to vibrate with a low level, but annoying irritation when she was there. It was stand to reason that he would be glad to see her gather her things and go, but, in fact, he hated it even more when she left. He heaved a big sigh. Fuck me.

Baka had been a person with a well-developed sense of morality, and a well-functioning conscience before he became a vampire. During the last hundred years of life as a vampire, having survived long enough to blessedly recover his understanding of right and wrong, he had voluntarily turned himself into The Order and served as "consultant" voluntarily consuming only artificial sustenance.

No. He had never been short on conscience. And that conscience was rubbing a hole in his brain telling him that it would be wrong to simply sit at a desk and plan a strategy on paper while, at the same time, doing nothing. So, keeping his own counsel, for better or worse, he determined that he would continue to work as a bureaucrat during the day, but would spend his nights - at least part of them - looking for others he might help back to the light.

He had worked with Monq at Jefferson Unit labs to develop a delivery solution. Taking a page from the methodology of the late Gautier Nibelung, they had decided that the safest and most effective approach would be dart gun. Each dart was outfitted with a tiny canister that would puncture on impact releasing a formula that was part stun and part cure. The proper dose of stun solution had been determined by tests on Baka himself. So he knew it worked. First hand. Obviously vampire must be incapacitated while the viral antidote works. As medicinal remedies go, it is fast working, but not instant. There is a delay of two to four hours between introduction to the system and complete reversal of the disease, depending upon the age and constitution of the individual.

His plan wasn't perfect. It depended on encountering one vampire at a time and extracting him, while paralyzed, without engaging other vampire. Tricky, but the alternative was waiting for a task force to be vetted, assembled, and trained. And waiting was the one thing he couldn't manage. Maybe it wasn't the smartest thing he'd ever done, but, hell, he'd had a long life.

To his advantage, he still had certain attributes that were extra human. Not like comic book heroes. More like human plus. No one knew if these benefits would fade away over time, but, for now, he was a little stronger, a little faster, and could see in the dark a little better than most people. All traits very useful for vampire hunting.

It just so happened that he found his assigned base of operations in prime territory that qualified as a vampire magnet on all counts. In Edinburgh's Old Town there was a large pedestrian population that came out at night and it was built on top of an underground system that was not utilized to any extent that would interfere with the needs of vampire. All this was literally in sight of his office - five minutes' walk away.

In a darkly poetic way, it was fitting that vampire would thrive in Edinburgh's underground city which consisted of a system of tunnels, caverns, and cells cut into the much softer sandstone under the rock that the above-ground Old Town is built upon. It's a place with grisly history where thousands of hapless poor lived in darkness, packed together without sanitation and with the vilest of criminals. Plague victims were not removed and buried or burned, but just sealed in their cells.

Modern day Ghost Tours offer a shallow excursion - shallow because individuals don't want to stay in the underground very long. Words like "creepy" are frequently used even by hard-core insensitives. That leaves miles of maze for a vampire haven.

Baka had been a vampire long enough to know all about how they think. He knew that the days of the Beltane festival would be a gorge fest for vampire. The Royal Mile, just over the heads of vampire living in the Underground, would be crowded with visitors to the city, visitors intent on celebration and revelry, danger being the last thing on their minds. It would be a blessing to vampire in the original sense of the word which was bloodletting; when, as a rite of passage, young pagans would stand in a pit under a grate where a bull was sacrificed and bathe in the blood that fell.

So Baka finished his day, went to dinner alone, and slowly savored every bite of his of actual food. Afterward, driven by a heartfelt desire to do some good in the world, he pulled on a pair of cargo pants and equipped the dozen pockets with two dart guns and as many canisters as he could carry without being slowed down. He descended the stairs to the main foyer wondering if, even partial redemption for a long life of misdeeds, is possible. The fact that he was not accountable for that infamous history should have given him some peace of absolution. But didn't. He said good evening to the doorman and headed out into the night.


Though works of fiction are a departure for me, I have had this series simmering on the back burner of my mind for years, but time is at a premium. In addition to authoring and illustrating Seasons of the Witch and writing course work for Seasons in Avalon, I play Classic Rock music and manage Houston’s premier variety and R&B band.


This series will include some of my education in the paranormal and fictionalized anecdotes from my journals during the years when I was a practicing “metaphysician”, but most of the material is fantasy – of course.