The Quest, by Mary Abshire - an FMB Promotions Blog Tour 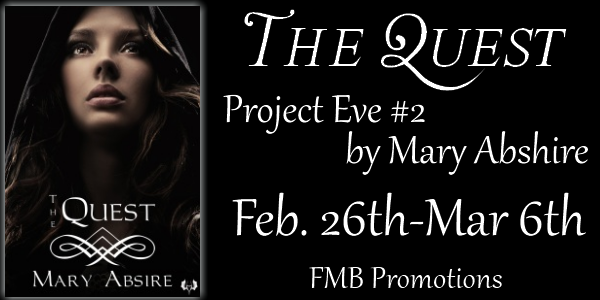 If there ever was a time where I felt saddened by my hectic reading schedule, it was on seeing this tour invitation. I absolutely LOVE this cover! I wish that I had time to read the first book, and follow with the second book of this series for this tour, but I just couldn't tack on any more reading commitments. However, I am more than happy to be part of the tour and help spread the word. We have an excerpt of this book for you today, as well as a tour wide giveaway for two ebook copies of The Quest. So don't miss out and enter today to win! 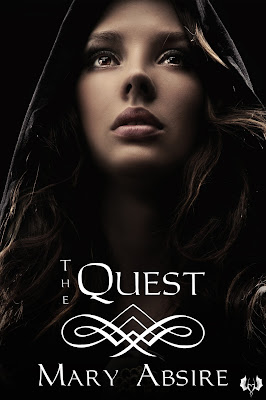 
Retribution. At any cost.


Now that she knows her name and what she is, she wants justice for everything shes lost. Though her memories elude her, she takes a job for a half-demon Senator and, aided by werewolves from a local clan, intends to uncover evidence that will convict the Senator of more than thirty murders.


Getting to the Senator and finding the necessary evidence is more difficult than she anticipates, especially when there is a bounty for her death. If that were not enough, the vampire who stole her memories returns and reveals unexpected truths. But shes not going to let anything stop her. Not a sadistic assassin or a servant or Lucifer. Not even her ex-lover, the vampire God of the Underworld. Nothing will stop her from claiming retribution...even if the price is her life.


From the main level, I rode an elevator to the basement. As I walked through the tunnel, toward the capital, clusters of government employees passed by. Unlike the other days when I came to work, men and women wore suits and chatted with serious looks on their faces. None of them carried lunch bags in their hands. I wondered if they'd come from a meeting or were going to one.

I reached the elevator to get to the subbasement and hit the button. While I waited for my ride, I scanned the area around me. The empty hall showed no signs of trouble and the voices of those who'd passed recently faded. I breathed in a relieving breath, finding myself alone and safe.

The ding of the elevator alerted me to its presence. The doors opened and a crowd of men and women in professional attire walked out. I stepped aside, staying clear of their path.

“Good evening, Shelley,” said an evil voice from behind me.

Since I had vampire hearing and hadn't heard her approaching, the bitch must have misted to appear near me. My blood boiled with anger. I hated the charmed bracelet on my ankle, preventing me from utilizing my demon and angel abilities.

With my jaw clamped so tight my teeth could've chipped, I glanced over my shoulder. She stood alone and dressed in a red suit.

“I didn't hear you coming,” I said in a rude tone.

Her lips formed a devilish smile. “You won't.”

Heat flamed within me, causing me to perspire. My clothes, damp from my dash through the rain, began to feel even wetter. The demon in me wanted out, wanted to rip her to shreds. Fortunately for her, the angel in me held the demon back.

After a few nods from the people passing, I strode onto the empty elevator. The bitch followed me and stood at the opposite side with her arms crossed. Alone with the Senator, I picked up her demon scent mixed with some other citrus type of perfume. The two odors mixed with the sight of the Senator made my stomach churn.

Once the doors closed, we faced each other. She had a feral look in her eyes, but I felt no fear. I had zero doubt I could kill her with my bare hands. She knew I could too, given she knew I had vampire strength. Her charmed bracelet couldn't freeze all supernatural abilities.

“I'm surprised you decided to show up this evening.” Galluzzi smirked.

I clenched the strap of my purse tighter. She obviously knew about the attack on me at Boss's house. Did she think she could provoke me?

I stepped closer to her and stood a foot from her face, glaring at her. “I'm not easy to get rid of.”

Emotion drained from her face. “No, you're not, but I have my ways.” She lifted her chin, displaying her arrogance. “Setbacks are normal in life, but I always win.”

Sweat trickled down the back of my neck. What would happen if I killed her in the elevator? Every bit of me wanted to see her dead now, instead of hung out in front of the world as a criminal. She deserved far worse. She deserved death.

Check out the rest of the tour!
Tour Schedule 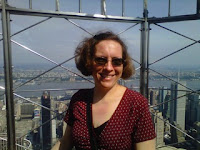 About the Author:
Outside of my government job, I write Paranormal Romance and Urban Fantasy. Dark and dangerous creatures are my friends. I create worlds with vampires, demons, werewolves, and other supernatural creatures. I even create new ones. How do I do this? I have a twisted mind and it gets better with wine.
Care to join me in my fantastical worlds? I’ll introduce you to my friends, and if they bite or corrupt your mind... it’s not my fault.