New Release Review & a Giveaway! - The Watcher, by Lisa Voisin 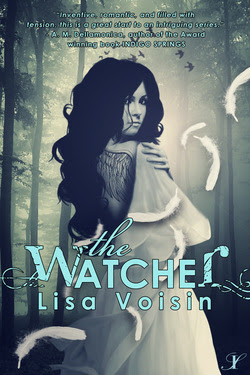 
Book Description: Millennia ago, he fell from heaven for her.  Can he face her without falling again?


Fascinated with ancient civilizations, seventeen-year-old Mia Crawford dreams of becoming an archaeologist. She also dreams of wings--soft and silent like snow--and somebody trying to steal them.


When a horrible creature appears out of thin air and attacks her, she knows Michael Fontaine is involved, though he claims to know nothing about it. Secretive and aloof, Michael evokes feelings in Mia that she doesn’t understand. Images of another time and place haunt her. She recognizes them—but not from any textbook.


In search of the truth, Mia discovers a past life of forbidden love, jealousy and revenge that tore an angel from Heaven and sent her to an early grave. Now that her soul has returned, does she


have a chance at loving that angel again? Or will an age-old nemesis destroy them both?


Ancient history is only the beginning.

'The Watcher' shouldn't have captivated me the way that it did.

It's the same old YA story, that's been told a hundred times, in a hundred different ways... or is it?

For all intents and purposes, Mia is a normal high school girl with a fascination for ancient cultures. A seemingly random event at the park throws her into a path that reveals more about her soul than she ever could imagine.

And into the path of the fallen angel that has loved her for a millennia. He has sworn to protect her, but resolved to build an impenetrable wall around his heart. But the return of his nemesis with his own resolve to claim her for his own has thrown a wrench in Michael's plans. The longer he is at her side, the harder it is for him to deny the strength of the ties that binds the two of them together.

He walked away from everything he was when he first met her. Will he forfeit his chance at redemption to be with her again?


The intensity between them was heart palpitating. The story line was filled with an array of emotions. From anger, to vengeance, anguish, hope, despair and undeniable love that brought the inevitable sting of tears to my eyes. 'The Watcher' had it all and more.

I was emotionally drained at the end of this, in a good way.

A YA romance that I highly recommend for YA Paranormal Romance lovers out there. About the Author: After studying English literature at the University of Toronto and creative writing at Simon Fraser University, Lisa Voisin had the great fortune of being mentored by Nancy Richler and A.M. Dellamonica through Betsy Warland's Vancouver Manuscript Intensive solo program. She is also a teacher of meditation with the Training in Power Academy

A member of the SCBWI (Society for Children's Book Writers and Illustrators), she can usually be found writing at a local cafe in her home town of Vancouver, B.C.

A self-proclaimed coffee lover, when Lisa's not writing, you'll find her meditating in the mountains to counteract the side effects of drinking too much caffeine!

More about Lisa can be found on her web site: http://www.lisavoisin.com.