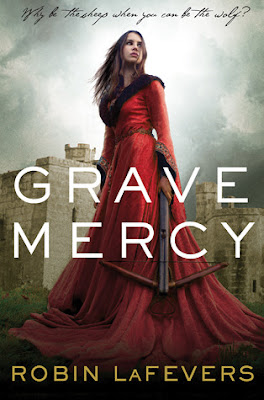 
Why be the sheep, when you can be the wolf?

Seventeen-year-old Ismae escapes from the brutality of an arranged marriage into the sanctuary of the convent of St. Mortain, where the sisters still serve the gods of old. Here she learns that the god of Death Himself has blessed her with dangerous gifts—and a violent destiny. If she chooses to stay at the convent, she will be trained as an assassin and serve as a handmaiden to Death. To claim her new life, she must destroy the lives of others.

Ismae’s most important assignment takes her straight into the high court of Brittany—where she finds herself woefully under prepared—not only for the deadly games of intrigue and treason, but for the impossible choices she must make. For how can she deliver Death’s vengeance upon a target who, against her will, has stolen her heart?

Thank you guys for voting for this book for the March  Pimp my GR Friends post.  What an insane ride this novel was! I fell head over heels with this book.

I love female characters like Ismae. A strong, lethal and beautiful female. Blessed by the god of Death from before birth, her immunity to poisons, her ability to heal faster than a normal human, makes her the ultimate assassin.

I was riveted from the very first page of this novel. From the moment that she is whisked away from her new husband's home after a near rape, and taken to the convent of St. Mortain to be trained, I was already 100% invested in this story and eager for more and more.

The political plots and schemes were exciting, and not as predictable as I thought they would be. In fact, every avenue that I thought of was blown out of the water and took me in a completely different direction on 'who dun it'.

Duval was an intriguing male lead. His unwavering loyalty to his Duchess and sister was endearing. Though he was the initial target of suspicion, I knew that there was more to him than met the eye, and so did Ismae. Their slow burning attraction to each other made me stop breathing through some of their most tension filled moments.  Their chemistry was solid, and though I didn't know how Death's handmaiden and the Duchess' right hand man could be together, I really wanted them to.

I was sucked in deeply into this story by the writer's eloquent  writing. Every character was explored and made known to me intimately, whether the character was hated or loved. The action scenes were cinematic, and visually fluent.

This was as epic as I hoped it would be, and I can't wait for the next installment! 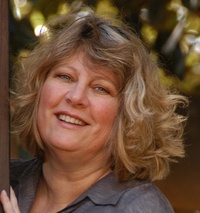 About this Author: R.L. LaFevers (Robin Lorraine when she’s in really big trouble) grew up surrounded by shelves of old dusty books and a passel of brothers. She has also spent a large portion of her life being told she was making up things that weren’t there, which only proves she was destined to write fiction. She is the author of over fourteen books for young readers, including THEODOSIA AND THE SERPENTS OF CHAOS, (Houghton Mifflin, 2007) which received starred reviews and was a Junior Library Guild selection, a Booksense Summer Pick, and nominated for the Malice Domestic’s Agatha Award, and the NATHANIEL FLUDD, BEASTOLOGIST series. Her first young adult novel, GRAVE MERCY, will be published by Houghton Mifflin Harcourt in Spring of 2012. She currently lives with her husband and a demonic cat in Southern California and spends her days gazing longingly at ancient artifacts or wallowing in old forgotten texts.

Posted by Bookluvrs Haven at 9:36 AM