Hello Everyone!  My 'To Read' list is growing daily now....there's just not enough time in the day to read!  I'm here to let you know about one more book to add to your 'to read' list.   'The Prophecy' sounds like nothing I have read before. It is sure to be an 'on the edge of your seat' type of read.  And let me not forget to mention that I love the cover!  Enjoy...and don't forget to enter the giveaway!!! :) 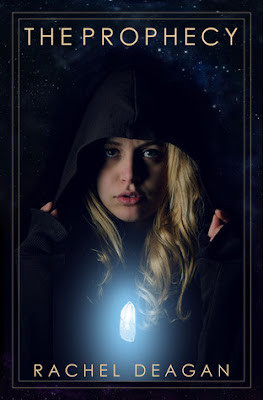 “The cards tell me of the children of the stars.”

Jacey thinks her life is worthless, when she finds herself in a psychiatric hospital after a failed attempt to end her life; her wounds miraculously healed. Devin, who claims to kill on touch, is also there. When Michael arrives, bearing telekinetic powers, he insists the government, and an even darker, more powerful force, wants them dead.

In a desperate attempt to escape for their lives, the three teens find they must confront an even greater adversary, themselves - and with a prophecy forced upon them, they must find a way to accept their fate, or rebel together, as one.


Michael grabbed us both by the arms, as he bolted for the fully closed and barred window, which faced nothing but blacktop and honking cars below. “Don’t worry, we’ve got Jacey. Heal us, love.”

I didn’t have time to think about what that meant. He let go of me briefly as he extended his arm in front of him. The bars snapped and the glass exploded free from the pane in an array of pixilated fragments—colored jewels against the starry sky. “Close your eyes,” Michael said, as he took my arm, and leapt through.

Everything dropped away as I fell. Time had momentarily suspended, and the air around me hollered in my ears. In the distance I heard men yelling, and even the crack of a gunshot—at least it sounded like one—but that commotion was soon drowned out by the low hum of car engines and blasting horns. My senses caught up to me as I saw the pavement closing in.

I was going to die.

“Tuck your chin and roll” Michael’s words sounded faint through the rush in my ears. “It’ll lessen the impact.”

A billion thoughts flushed through my mind faster than I would have thought humanly possible, the main one being: He’s insane. What’s the point? Even so, in a last-ditch effort to survive, I closed my eyes and bent my chin to my chest, just as the ground met me.

The bones in my upper back cracked with the impact, along with a stinging roar of pain. I felt my legs bounce, as I rolled out onto the blacktop. A buzz sounded in my head. I couldn’t move. The sound of a car skidding, its tires ripping with the smell of burnt rubber, shuddered through me, and then everything went white.


Add it to Goodreads!
Purchase it on Amazon

The Giveaway!
Two paperbacks & Two Kindle Versions of 'The Prophecy'