Wowwieee!!  I am SO EXCITED about this book!  I love the twisted fairy tales, and they seem to be coming out in clusters recently!  When I saw this  Book Blitz come out I jumped on it immediately!  I think a little too soon, since about a week later it came out for reviews, and I had already said yes to this one...so I am going to have to purchase this collection of books myself.  Which is certainly not a loss of money.  I cannot wait to read these!!   Oh, and look how absolutely stunning these covers are!!!  Click on 'Read More' to read an except from the book, an awesome giveaway and more!!! 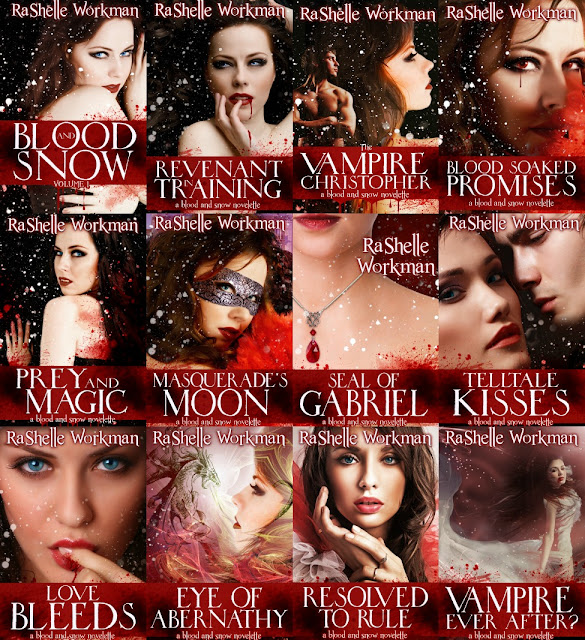 Synopsis:
Every thousand years the Vampire Queen selects a new body, always the fairest in the land, and this time she's chosen Snow White.

Snow isn't an ordinary girl. She doesn't know that yet.

When Snow gets bitten by a Hunter, her life is thrown into a whirlwind of change where instead of worrying about what to eat, she has to fight not to drink the blood of fellow high school students. She becomes a revenant - not quite human, not quite vampire.

With the help of an eccentric old Professor, his seven adoptive sons, and her best friend, Snow learns to control her blood craving. Sort of.  She drinks a bloodlust tea, but she'd rather drink from her Hunter.

She also discovers a whole other realm, one filled with fairies, dragons, and magic. And not only does the Vampire Queen want her, but there's a pendant called the Seal of Gabriel created for Snow by the Vampire Queen's twin sister. And Snow's supposed to use it to restore balance to all magical creatures. Including vampires.

When you lose everything, there’s only one option. Jump. Go all in. Which is what I did. With both fangs. I embraced my vampire… ism?... ness?... tendencies?...  whatever. I accepted them and, the truth was, I liked it.

At least while I partook of human blood. After, when the drunken haze faded, guilt would edge its way in. I hadn’t killed another human, not since Gabe, but killing him was horror enough. It ate at my heart. I remembered the grotesque way Gabe’s body laid on the floor. The way Professor Pops and the guys looked at me. With loathing, disgust, and fear. But I deserved it. I’d become a monster, and killed a brother. A son. A boy I thought I might love. He kissed me, and I repaid him in blood. Lots of it. Maybe even all of it. My carnal need overtook all other emotions, and I let myself give in. Relished the sensation.

RASHELLE WORKMAN lives on a mountain with her husband, three children, and three dogs. From her back porch she can see the city lights and imagine... She's the bestselling author of the Dead Roses series (Sleeping Roses is being translated into Turkish, and will be available in print wherever Turkish books are sold in 2014), the Immortal Essence series, and the Blood and Snow series.