Review of Captured, by Kenya Wright 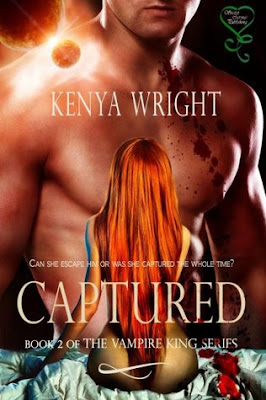 
Book Description: Can she escape him or was she captured the whole time?

Brie and Samuel travel to the human town of Freemont and learn that Brie is being hunted. Brie is more than a domina. But what is she? And why is she being hunted as if she is the solution to a puzzle that the Quiet King has never been able to solve?

Samuel and Brie are forced to align with another, one that holds many answers and incites even more questions. Their journey drags them back to Capitol City and among the night life where sex and secrets mingle together within the light of the two moons. All this time Brie thought she’d escaped and gotten away free from vampires. But can she run away anymore or was she captured the whole time?

This is a review of Book 2 of the Vampire King Series, so though I will try my best not to divulge any spoilers, just be cautious if you haven't read Book 1 yet (which was GREAT!!).

On to the review:

If you are hoping that this second installment is

After learning that Brie is now being hunted by his father's men, Samuel is more than determined to keep Brie at his side.

As the hunt for Brie continues, it becomes obvious to her and her company that there is more to her than they ever could imagine. And they are all determine to find out exactly who and what she is.

Though Samuel tries to convince himself that it is for her protection, in his heart he knows that his reasons for not wanting to let her go are deeper than to just protect her life. He finds himself a man in love, and Brie his queen, whether she understands it or not.

Brie is determined to fight her feelings for Samuel. She wants to be free, and not forced to be with any man.

But she is as much his, as he is hers.

Their connection is undeniable, and while in their quest for answers to their questions about Brie, it presents itself physically in Samuel. He is changing slowly into the Vampire King he is meant to be. He is growing larger, stronger, vicious, and more protective over his Queen than ever before.

The story continues to be as intricate and gorgeously molded as I hoped for and anticipated. A couple of twists that kept things from being far from boring. And of course, Kenya Wright seems to have a knack for writing some sexy moments that can certainly make you blush, and romantic scenes that just make your heart palpitate.

I can't wait to see what she has in store next. 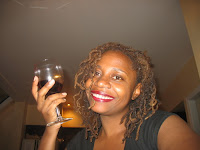 About the Author: Kenya Wright always knew she would be famous since the ripe old age of six when she sang the Michael Jackson thriller song in her bathroom mirror. She has tried her hand at many things from enlisting in the Navy for six years as a Persian-Farsi linguist to being a nude model at an art university.

However, writing has been the only constant love in her life. Will she succeed? Of course.

For she has been coined The Urban Fantasy Queen, the Super Iconic Writer of this Age, The Lyrical Genius of Our Generation. Granted, these are all terms coined by her, within the private walls of her bathroom as she still sings the Michael Jackson thriller song.