Review of The Immortal Rules, by Julie Kagawa 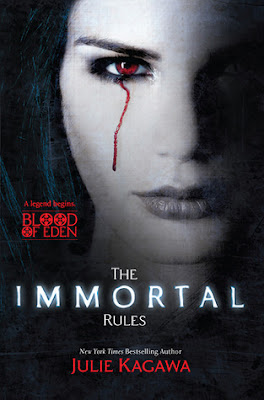 To survive in a ruined world, she must embrace the darkness…

Allison Sekemoto survives in the Fringe, the outermost circle of a walled-in city. By day, she and her crew scavenge for food. By night, any one of them could be eaten. Some days, all that drives Allie is her hatred of them—the vampires who keep humans as blood cattle. Until the night Allie herself dies and becomes one of the monsters.

Forced to flee her city, Allie must pass for human as she joins a ragged group of pilgrims seeking a legend—a place that might have a cure for the disease that killed off most of civilization and created the rabids, the bloodthirsty creatures who threaten human and vampire alike. And soon Allie will have to decide what and who is worth dying for… again.

I started reading 'The Iron Fey' series by Julie Kagawa last year, and completely fell in love with the series. I have not gone through all the books YET, but I am on a mission to pick up the series where I left off.  So I simply could not pass on reading her new vampire series to see what it was all about.


In 'The Immortal Rules' I met Allie, a heroine to be envious of. She is compassionate, loyal, strong and maybe a little too trusting when she shouldn't be, but a fierce warrior when needed.  None of these qualities are more prominent and evident than when she becomes the one thing that she hates most.

Kanin, her maker, takes Allie under his wing and teaches her how to hunt, fight, and survive. As he gave her a choice to live as a vampire, or die as a human, he now gives her the choice to survive as the being she is now.  Tries to convince her to harden her heart, learn to let go of her past, and to forgo her human tendencies.  But Allie refuses to let go of what makes her 'good'.

She ventures out into unknown territory, beyond the gates that surround a city that is the only home she has known. She encounters a group of humans that will test her to the very limits of her will power. Facing a zealous leader, and feeling forbidden feelings for his son, this story has every element that you would be looking for in a great book.

There are elements I loved in this book:

1. A catastrophic virus that wipes out large numbers of the human population. Awesome.

3. Virus and vampires don't mix all that well sometimes. Introducing the rabids. They act and appear to look like zombie vampires. That's a double awesome right there.

There was a lot of walking in this novel. It sometimes slowed the plot right down and made this novel seem a little longer than it probably was. But when there was action, the adrenaline rush was great!  I especially loved the last 20% of this novel when the excitement was really non-stop.  The plot had a lot of original elements and ideas that I really enjoyed.

Though this is very different from Kagawa's 'The Iron Fey', it is no less worthy of praise. I am glad that the author took the plunge and published something so different from her other series. I am very curious to see what this journey holds, and will definitely continue this series. 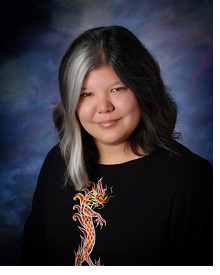 About the Author: Julie Kagawa, the New York Times Bestselling author of The Iron Fey and Blood of Eden series, was born in Sacramento, California. But nothing exciting really happened to her there. So, at the age of nine she and her family moved to Hawaii, which she soon discovered was inhabited by large carnivorous insects, colonies of house geckos, and frequent hurricanes. She spent much of her time in the ocean, when she wasn't getting chased out of it by reef sharks, jellyfish, and the odd eel. To pay the rent, Julie worked in different bookstores over the years, but discovered the managers frowned upon her reading the books she was supposed to be shelving. So she turned to her other passion: training animals. She worked as a professional dogtrainer for several years, dodging Chihuahua bites and overly enthusiastic Labradors, until her first book sold and she stopped training to write full-time.

Julie now lives in Louisville, Kentucky, where the frequency of shark attacks are at an all time low. She lives with her husband, two obnoxious cats, one Australian Shepherd who is too smart for his own good, and the latest addition, a hyper-active Papillon puppy.          Author Website/Blog/Twitter:@jkagawa/Goodreads