Review of Shadow of Wrath, by L.W. Patricks - An Xpresso Book Tour

Once in a while, a book comes around that surprisingly blows me away. This book is one of those. Thank you to the author and Xpresso Book Tours for the opportunity to discover it. Follow the tour schedule to check out some other awesome bloggers, and check out what they thought! There is also a GIVEAWAY at the end of this post that I don't think you should miss! 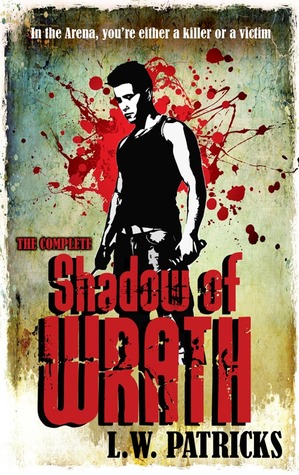 In the Arena, you're either a killer or a victim.

If survival meant murdering an innocent person in cold blood every week, could you do it? Are you able to stick the knife into your opponent's heart while they look at you with fear in their eyes? Life in the Arena turns everyone into sinners.

A homeless boy is kidnapped from the streets and finds himself imprisoned in a far more horrifying place: The Arena, a place where teenage boys fight to the death for the pleasure of various lowlifes.

The Arena is the brainchild of Ryker, an ex-convict addicted to alcohol, gladiatorial-esque combats, and money. When not devising new ways for boys to kill each other, he’s ruling his small empire with a ruthless fist, rewarding his guards with sex slaves and punishing those who oppose him with barbaric executions.

Renamed Dog, the boy from the street proves to be an excellent fighter and finds himself surviving week after week, but as he leaves a trail of bodies in his wake, the ghosts of slain boys haunt him and the violence threatens to wake a beast inside him.

Allegra, a slave girl in the Arena and a victim of Ryker's constant abuse, is his only key to salvation. She has lost everything already -- her family, her innocence, and her dignity -- while her will to live hangs on by a thin thread. Can she save Dog's humanity before she too succumbs to the horrors of the Arena?

Seeking to defy Ryker as Dog rises to power as his champion, the stage is set for something to give in this murderous world of young combatants.

A tale about survival, tragedy, and human perseverance, the Complete SHADOW OF WRATH is the first book in the Sins of the 7 series.

How about the movie Gladiator?

How about a book that reminds you of both? For me, it was the resemblance to a book series that I fell in love with, and a movie that is one of my favorites of all time, that captured me at every page I read.

An orphan boy is unceremoniously pulled off the streets, and thrown into a nightmare of a world. He is tossed into the middle of an arena, where he faces off another child, and told to fight to the death for the amusement of the ticket purchasing mob.

A boy that came in with no name that he can remember. Named Dog by the sadistic and cruel master that rules this world. He takes the name and makes it his own. He gives the mob what it wants - blood, glorious & brutal death - a SHOW. He accepts each tattoo carved on his skin for every life he takes in the arena with deference, and speaks to each ghost that visits him after with sincere apologies and anguish for what he was forced to do.

He gives them the cleanest and fastest death he can.

In order to survive.

He is a cold and calculated fighter. But in his chest... his heart beats and cries out for the injustice of the world he is now a part of, and cannot escape. His hate grows for one man... Ryker, the mastermind of this monstrous society.

But hate does not consume him completely, because love is stronger than hate.  When Allegra first met him as a boy and helped heal his physical wounds, he snarled at her.  But with each fight, each healing, each year they find comfort in each others friendship.

But in the hidden world of Bimini, slaves are possessions to sell, enjoy, and abuse. Champion fighters are merely dollar signs to Ryker. And the only means of escape seems to be only through the cold embrace of death.

This novel is not for the weak of stomach, or heart for that matter. It is brutal and savage. It is heartbreaking but joyous.  There is savage death, and depravity but there is immense sacrifice, redemption and hope. It is a story that will turn your stomach, and make you cry.   It is a story that will stick with you after you wipe the tear off your cheek; long after you finish the very last page.... 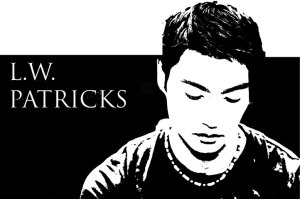 L.W. Patricks is the author of SHADOW OF WRATH and the literary architect behind the upcoming Sins of the 7 series with his second book: AWAKE THE GHOSTS to be published late 2013.

His short fiction works has been published by Crow Toes Quarterly Magazine, Fiction and Verse literary magazine, and upcoming Denizens of the Dark. He enjoys writing contemporary fantasy with an emphasis on creating urban mythology for his stories.

Though he calls Toronto his home, L.W. Patricks has a passion for exploration and has travelled all over the world including Germany, Netherlands, Italy, France, Spain, Czech Republic, Austria, United Kingdom, Thailand, Hong Kong, Cambodia just to name a few. His diverse experience amongst other cultures provides inspiration for his stories.

He currently lives in Toronto with his wife where he enjoys the scorching summer days and the icy winter nights while masquerading as a Word Samurai. He claims to be the offspring of a typewriting chimp and a literary ninja.

You can visit him at his website at www.lwpatricks.com