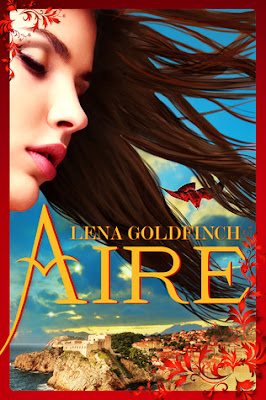 A tale of Legends reborn, royal intrigue, and an unforgettable, heart-melting romance that will sweep you away.

Annalisia is a seer, a princess with a courageous spirit—and a soft spot for Legends.

Jovanni is a Legend, a commoner with no patience for pampered royals.

Principessa Annalisia is stunned and conscience-stricken when an unknown enemy mistakenly abducts her maidservant. Determined to find the girl, Annalisia disguises herself as plain Anna and slips away from the palace. She tracks down Jovanni, her maidservant's daring older brother, and they soon begin to search together. As they uncover clues, Anna also discovers a kindred spirit in Jovanni. But would he be so free with her if he knew who she really was? Doubtful. Even so, she reveals her secret gift of visions to him, and in so doing disobeys the orders of her beloved grandmother, the queen.

With Jovanni, Anna can almost imagine she’s like any other seventeen year old girl, free to pursue the longings of her heart. When she learns that he also has a secret—he's a sentinel, an ancient shapeshifter who can take the form of a falcon—it seems as if they were destined to be together, as in the legends of il Sentiro. Though Anna is tempted to wish otherwise, she can’t forget that she’s a princess and it's her duty to marry another. Meanwhile, their hunt leads Anna ever closer to danger, for she herself is being hunted.

A princess and a commoner.

They never should have fallen in love...but they did.

AIRE is a lush, romantic fantasy, inspired by ancient Italy and Turkey.

Annalisia is a prisoner to the crown.  As a royal princess, choices have been made for her since birth.  Regardless of how special she is, she is an asset to the crown whether she likes it or not, and her place is to strengthen the power the throne her family sits on, holds.

She dreams of freedom and being able to fall in love.  Impossible dreams.  Her husband is already chosen for her and she has just met him.  She thinks him handsome, and kind.  Maybe she can learn to love him, and her burden won't be so heavy. Until he scoffs at the Legends she so loves.  Annalisia is disheartened. Because the Legends are real.  Otherwise she wouldn't be able to do what she does.

On her return home, a new nightmare evolves around her.  Her maidservant, who she cares for as a friend, is taken.  But to what purpose? Just before, she was wearing Annalisia's headpiece. Could Annalisia have been the intended target?

Guilt ridden and desperate to find her, she leaves the safety of her castle and meets Jovanni, who is her maidservant's brother, who is equally desperate to find his sister.  Not knowing Annalisia's true identity, he agrees to accept her help.

But Jovanni has a secret of his own. A secret so great that it can change the course of both their lives, and that of their kingdom.

Forbidden love, hair raising quests, villains and conspiracies, this novel has it all.  'Aire' is a story about two young people from different walks of life falling in love, and not knowing how they can possibly be together.  It is a story about deep friendships and sacrificing for what is right.  It is the impossible made possible when you follow your heart and never give up.

It was difficult to finish a novel where you are transported into such a colorful and magical world. But I sure enjoyed the fairy tale journey that was 'Aire'.

Posted by Bookluvrs Haven at 2:27 PM

Email ThisBlogThis!Share to TwitterShare to FacebookShare to Pinterest
Labels: 4 Star Reviews, YA Fantasy, YA Romance