Review of The Talisman of El, by Alecia Stone 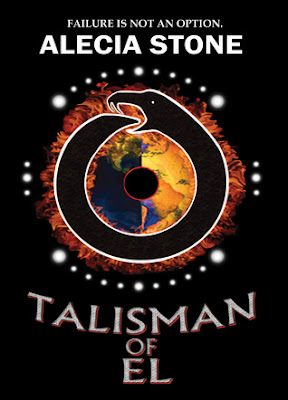 WHAT IF YOUR WHOLE LIFE WAS A LIE?

When 14-year-old Charlie Blake wakes up sweating and gasping for air in the middle of the night, he knows it is happening again. This time he witnesses a brutal murder. He's afraid to tell any one. No one would believe him ... because it was a dream. Just like the one he had four years ago - the day before his dad died.

Charlie doesn't know why this is happening. He would give any thing to have an ordinary life. The problem: he doesn't belong in the world he knows as home. He belongs with the others.

Maybe I wasn't in the mood for an adventure quest.  But this book didn't really keep my attention.  I found myself skimming a lot of the story and focusing only on the action parts, or just some of the dialogue. Kind of like what I do when I watch my soap opera - fast forward all the parts I don't care for, and watch only the dramatic storylines that are unfolding that I care to know about.

It wasn't that this story wasn't well written, or well paced. It was the content of the story that just didn't grab me fully.  I didn't really latch on to any particular character, which is a pity, since that seems to be my routine as a reader. I connect with a character, and I immerse myself into the storyline through their eyes. But there was no one in this story that grabbed my attention enough for me to make that needed connection, so I was very detached from this novel.

That being said, don't dismiss this adventure. I can see Harry Potter and Percy Jackson fans really gobbling this up and loving it.

About this Author:
An excerpt of Talisman Of El can be found at: http://bit.ly/ZGJZkD

Alecia Stone has been in love with anything and everything paranormal for many years. She grad­u­ated with a BA in Film & TV and has worked in tele­vi­sion for a short period of time before branch­ing out into storytelling.

When she isn't writ­ing, she enjoys going to the movies, lis­ten­ing to music, and travelling. Talisman Of El is her first novel. She currently lives in England, UK.

Posted by Bookluvrs Haven at 12:36 PM

Email ThisBlogThis!Share to TwitterShare to FacebookShare to Pinterest
Labels: 2 star reviews, YA Adventure, YA Fantasy