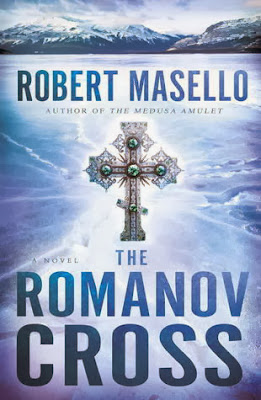 Nearly one hundred years ago, a desperate young woman crawled ashore on a desolate arctic island, carrying a terrible secret and a mysterious, emerald-encrusted cross. A century later, acts of man, nature, and history converge on that same forbidding shore with a power sufficient to shatter civilization as we know it.

Army epidemiologist Frank Slater is facing a court-martial, but after his punishment is mysteriously lifted, Slater is offered a job no one else wants—to travel to a small island off the coast of Alaska and investigate a potentially lethal phenomenon: The permafrost has begun to melt, exposing bodies from a colony that was wiped out by the dreaded Spanish flu of 1918. Frank must determine if the thawed remains still carry the deadly virus in their frozen flesh and, if so, ensure that it doesn’t come back to life.

Frank and his handpicked team arrive by helicopter, loaded down with high-tech tools, prepared to exhume history. The colony, it transpires, was once settled by a sect devoted to the mad Russian monk Rasputin, but there is even more hiding in the past than Frank’s team is aware of. Any hope of success hinges on their willingness to accept the fact that even their cutting-edge science has its limits—and that the ancient wisdom of the Inuit people who once inhabited this eerie land is as essential as any serum. By the time Frank discovers that his mission has been compromised—crashed by a gang of reckless treasure hunters—he will be in a brutal race against time. With a young, strong-willed Inuit woman by his side, Frank must put a deadly genie back in the bottle before all of humanity pays the price.

The Romanov Cross is at once an alternate take on one of history’s most profound mysteries, a love story as unlikely as it is inevitable, and a thriller of heart-stopping, supernatural suspense. With his signature blend of fascinating history and fantastic imagination, critically acclaimed author Robert Masello has once again crafted a terrifying story of past events coming back to haunt the present day . . . and of dark deeds aching to be unearthed.

After reading this novel, I promptly added a couple more of this author`s books on my to read list. This was a great and intriguing adventure told from different POVs that actually brought this novel to a whole new level. Not only told from different character`s points of view, but also in different times.  And how can you go wrong with a mystery involving such a mysterious character as Rasputin and the Romanov family conspiracy.

The author takes creative liberties with the retelling of their story, especially what happens to Anastasia, daughter of Tsar Nicolas II, the last sovereign of Imperial Russia, who was rumored to have escaped her family`s execution in 1918.  In this novel, Rasputin is claimed to have had a mystical and spiritual connection with Anastasia, and passed a relic he wore - a cross elaborately decorated with emeralds - to Anastasia prior to his assassination, which she kept hidden on her person, and was hinted throughout the book as possibly protecting Anastasia as it may have protected Rasputin in life.

Combine this with a desolate and `cursed`island off the Alaskan coast where a mysterious coffin originates from, the threat of Spanish flu escaping into modern population and potentially causing another devastating epidemic, and an epidemiologist racing against time to study it and prevent the devastation from happening, and you have an amazing thriller that will keep you not only on your toes, but on the edge of your seat.

Not only was Robert Masello able to bring all of these different characters to life, both past and present but he was also able to create an amazing connection from past to present events with some amazing and unforeseen twists.  It was an intricately written and magical novel that was truly hard to put down.  It also made me curious to read up more on Rasputin and the Romanov family once I reached the end of this novel.

I am really looking forward to reading more from this author and I am glad that I had the opportunity to discover him through Netgalley.


Robert Masello is an award-winning journalist, TV writer, and the bestselling author of many novels and nonfiction books. His most recent thrillers include BLOOD AND ICE, THE MEDUSA AMULET, and THE ROMANOV CROSS, all published by Bantam/Random House.
He is also the author of two popular studies of the Occult -- FALLEN ANGELS AND SPIRITS OF THE DARK and RAISING HELL: A CONCISE HISTORY OF THE BLACK ARTS.
His books on writing include WRITER TELLS ALL and the classroom staple, ROBERT'S RULES OF WRITING.
His TV credits include such popular shows as "Charmed," "Sliders," Early Edition," and "Poltergeist: the Legacy."
A native of Evanston, Illinois, he now lives a few blocks from the beach in Santa Monica, CA, with a black labrador retriever named Becky (who loves to swim.)