Netgalley Book Review - Mistress of the Solstice, by Anna Kashina 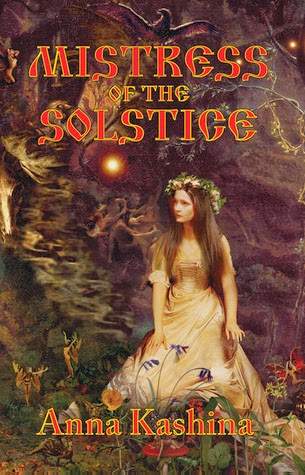 THE DARK ESSENCE OF RUSSIAN MYTH

As the head priestess of the ancient Solstice cult, Marya must sacrifice a virgin every year. She copes with this gruesome duty by assuming a mask of cold detachment, as her father—the evil tzar Kashchey—devours the maidens' souls to maintain his youth and power. It is his power alone that keeps Marya’s kingdom safe from all enemies—or so she was raised to believe.

When Ivan arrives on a quest to stop the virgin sacrifices, Marya throws all her magic against him. To maintain her life—and that of her father—she must destroy Ivan before he completes his quest. But can she find it in her heart to do so?

Baba Yaga, Leshy, Vodyanoi, and the ancient animal deities come alive in this beautifully crafted romantic story that will take you into the authentic world of Russian fairy tales—with a dark, sensual twist.

I am not very familiar with Russian folklore, or fairy tales. I've heard of Baba Yaga, but not sure where I came across this dark character, to be honest. After reading this novel I am certainly as curious to explore Russian fairy tales, as I was absorbed in the dark twists of English ones.

This was quite new territory to me, and having no or extremely limited background or knowledge, it took me a little while to get into this story after the introduction. Sacrificing young virgins is pretty riveting subject matter. Once it cut to Ivan's point of view, I did get a little lost.

Marya and Ivan were very interesting characters. Not to mention the lesser cast. They were pretty well developed, though it was too delayed for Ivan for my taste. He seemed to have been thrown into this story without much background. I didn't really know who he was and why he was on these missions until later in the book.

Unfortunately, the plot line lacked as much development. Though I was intrigued every time I read a chapter in Marya's POV, I was still quite confused when it switched to Ivan's. I was never quite sure where he was, and what his goal was, until the storyline between both characters begins to really merge. The lesser cast of characters also lead to my discontentment. I would have liked to have seen more back story on Baba Yaga, Leshy, and even Marya's father, for example. I felt like I was at a disadvantage reading this novel without any knowledge of Russian folklore, which is unfortunate.