Random Read Review - Deal with a Demon, by Celeste Easton

This was my Random Read pick for the month of November, and I am actually a day late with my review, even though I really tried to finish this one in time. I didn't have a lot of reading time this month, unfortunately. But what a delicious novel!!! 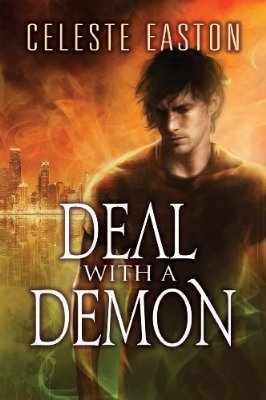 After her parents’ brutal murder, Nic Wright shut herself off from the world, barricading her heart against everyone but her brother, Drew. So when he goes missing, dragged into Hell by soul-thirsty demons, Nic doesn’t think twice about going in after him. Because Drew may be a junkie, but he’s all she’s got. And she’ll be damned if she’s letting him go without a fight.

Which is exactly what Arden of the Asmodai, sexy, arrogant prince of the Nine Hells, and Nic’s guide, is counting on. Half mortal, Arden’s only shot at becoming a full demon is to deliver a willing human to the Fourth Level of Hell. And Nic, desperate to find her brother, will do nicely. But Arden didn’t count on Nic’s powerful will...or the ferocity of his desire for her. Now, as they descend into a Hell beyond Nic’s wildest dreams—and her worst nightmares—Arden will take any risk and tell any lie necessary to keep her safe. To possess her. Forever...

Man, this book was hot.

I love hard ass female characters and Nic is certainly one of them.  She's had a lot on her shoulders after her parents are murdered, and her drug addicted brother spirals even deeper into a messy life. Striking a deal with a nasty demon and being taken to Hell is very possibly a clear sign of how messed up he is. And Nic has no choice but to follow with intent to rescue him. In order to do that she has to strike a deal with another demon, Arden, to escort her through the levels of Hell to rescue her brother.

The chemistry between these two absolutely sizzles from the pages of this book. This novel took me completely by surprise with its intensity - not only between Nic and Arden, but also the action packed storyline.

I am incredibly pleased that the novel ended with the hint of a continuation. Though Nic and Arden's story is concluded satisfactorily, Arden does have a handful of brothers! And I am really looking forward to getting to know them better. :)


If you are a fan of paranormal romance, you will go gaga over this one. Add this one to your list, because you won't be disappointed.

About this Author:
Novelist Celeste Easton was born in Ohio, where her first words were "Read me." (<--true story!) When she isn't penning dark, demonic, and delicious paranormal romances, she's busy collecting shoes and Victorian funerary photographs. She has an amazing, funny, and supportive husband, along with a herd of furry children. She's obsessed with cake and Sugar-Free Redbull. And! She's also a tattoo artist.
Author Links: Website / Goodreads / Twitter

Posted by Bookluvrs Haven at 11:21 AM