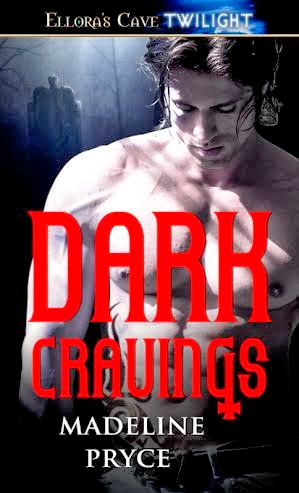 As a half-breed vampire, Ella Grey’s life sucks. She does her best to pass the time killing demons and secretly admiring her Shadow Hunter partner, Micah. He’s hot, dangerous and knows it. He’d be just Ella’s type if he weren’t likely to kill her the moment she put a toe out of line.


A chance encounter with a succubus changes everything. From the second the succubus’s spell washes over them, Ella and Micah are helpless to keep their hands off one another. The sex, when it’s not leaving them on the verge of death, is earth shattering and for the first time in ages Ella is connected with someone on a level she’d feared lost forever. But a dangerous prophecy has been set into motion, and if Ella’s not careful it’ll pull her straight from Micah’s arms and into the deepest bowels of the underworld.

It is now making its debut as 'Dark Cravings', and the second in the series, 'Dark Innocence' is set to be published at the end of the month. It's been a while since I have been this excited for the next book in a series.

There was no mistaking the chemistry between Ella and Micah from the very first page, while they are out hunting demons, and a succubus appears on the scene. A spell of lust turns both their worlds upside down.  But it's no surprise when it is discovered that their mutual intense attraction is not solely due to a nasty succubus spell.

Ella is an intense female. I love these strong female characters. She is independent, strong, and a no nonsense fighter, who can hold her own. But there is a sense of vulnerability about her that makes her so much more endearing. She has a quirky sense of sarcastic humor that not only made me laugh but really drew me to her character.

Micah is primal, raw and ohhhh sooo delicious to read about. He is the epitome of male sensuality. Strong, protective and intense. And of course, he has the perfect hint of sensitivity. He's a warrior with a guarded heart. Exactly the kind of guy that make our lady hearts pitter patter erratically.

Madeline Pryce kept me pretty riveted from beginning to end with her well written action scenes, conflicts and betrayals (and of course, those sexy scenes were hot, hot hot!). The characters were very full bodied and intriguing. I completely cared fully about individual characters and similarly, hate others. A great example was the Vampire Queen. She was not physically within the novel until the very end, and a short lived scene at that, yet her past had been well explored, her character well built, and as a reader, I felt that I knew the little deviant and wished for her demise.


Madeline Pryce wrote her first novel when she was ten, penned with neon-pink ink in a loose-leaf binder. Captivated by romantic literature, yet intrigued by the paranormal, she continues to develop her own voice, writing the kinds of stories that inspired her as a teen.

Posted by Bookluvrs Haven at 7:30 PM