I LOVE THIS COVER!

The moment I saw it, I knew that I would very likely read this book, no sypnosis required. I know that's so superficial, but it's the truth. The bonus is that it sounds very interesting, so I took advantage of the free Amazon promotion and grabbed myself and copy! It's only free until November 22 so hurry over now!

Also don't miss your chance to win some cool swag and gift cards. Check out the tour giveaway and enter for a chance to win. Good luck everyone! 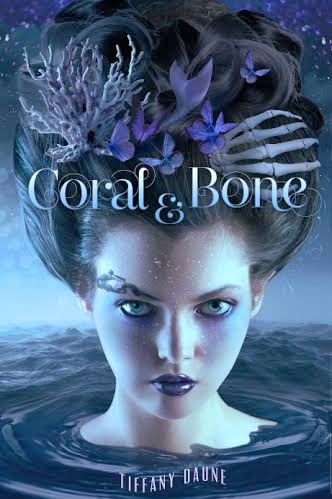 Halen knows the sparks igniting under her fingertips are dangerous. She has spent her entire life trying to quell the tingly feelings that make her destroy things, but now that she is back in Rockaway Beach, where she watched her father drown, the flames have become impossible to tame.

Halen is trying to hold on, but when she is thrust into a mysterious new world, the underwater realm of Elosia, she unravels the secrets of her past and can’t help but ignite. As she explores Elosia, she realizes her life has been a lie. And when those who have deceived her come to her for help, Halen must choose—walk away or unleash the magick that could destroy them all. 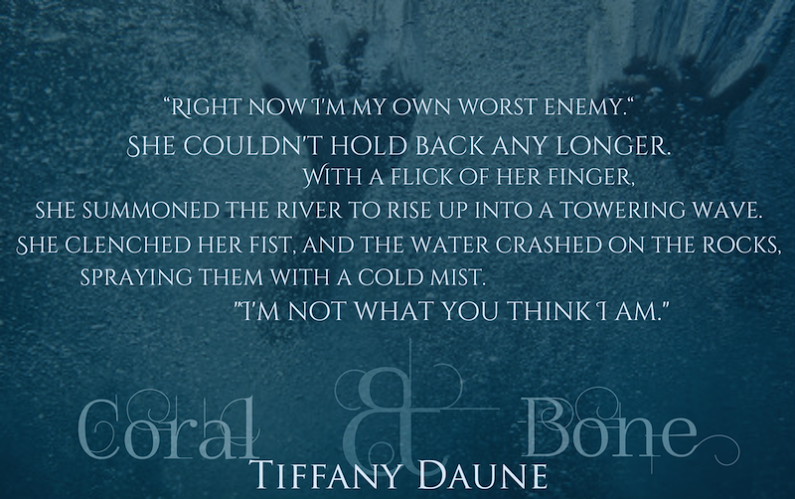 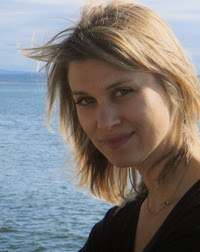 AUTHOR BIO:
I write stories about magick, love and dark creatures lurking in the shadows. When I'm not lost in Edit Land you can find me reading a book from my towering TBR pile or at the movie theater nibbling licorice. I don't have a lucky number, but my favorite time is 11:11. I completely believe that the fortunes found inside cookies will come true and that you must be careful when wishing on stars. I live on an island, so if you want to visit you'll need a boat, and if you want to survive the passage, be sure to bring candy for the mermaids.

Posted by Bookluvrs Haven at 1:05 PM No comments: Links to this post 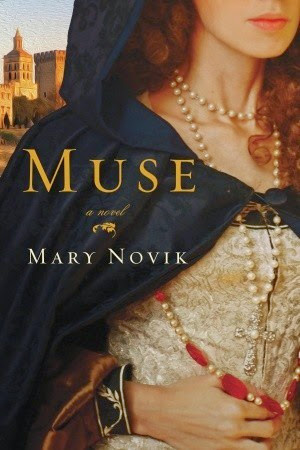 Richly engaging historical adventure in the vein of The Winter Palace and The Malice of Fortune.

Muse is the story of the charismatic woman who was the inspiration behind Petrarch's sublime love poetry. Solange Le Blanc begins life in the tempestuous streets of 14th century Avignon, a city of men dominated by the Pope and his palace. When her mother, a harlot, dies in childbirth, Solange is raised by Benedictines who believe she has the gift of clairvoyance. Trained as a scribe, but troubled by disturbing visions and tempted by a more carnal life, she escapes to Avignon, where she becomes entangled in a love triangle with the poet Petrarch, becoming not only his muse but also his lover.

Later, when her gift for prophecy catches the Pope's ear, Solange becomes Pope Clement VI's mistress and confidante in the most celebrated court in Europe. When the plague kills a third of Avignon's population, Solange is accused of sorcery and is forced once again to reinvent herself and fight against a final, mortal conspiracy.

Muse is a sweeping historical epic that magically evokes the Renaissance, capturing a time and place caught between the shadows of the past and the promise of a new cultural awakening.

I have at times expressed my enjoyment of historical novels, yet... I don't really pick them up very often. I have to be in a certain mood to really enjoy them. That is usually when I am on vacation, or have a weekend on my own with no distractions where I can really focus on stories like these.

'Muse' was certainly an intriguing novel, filled with court drama and the injustices of being female in an era that really treated women like crap.  Solange is no exception, even though she attracts the attentions of a romantic, dashing and poetic soul who is, unfortunately, easily swayed by the promises of power.  Petrarch was irritating to me, and his fickle love left a lot to be desired.

Unfortunately for Solange, even though she becomes a personal confidante to the Pope himself, the powers afforded to her are merely an illusion.  Understanding that there was envy aimed towards her was a laughable concept the price she had to pay to bear this 'power' and influence.  In this novel it was clear - whether poor or wearing the finest gowns and jewellery - the chains were ever present, tight and heavy, leaving their mark on the soul.

Mary Novik writes eloquently and with a beautiful style that has me curious about her other novels.  Though there was not enough focus on Solange's abilities to satisfy me, there certainly was enough drama and misfortune to keep me intrigued to the end.  I would certainly recommend this novel to fans of historical fiction. 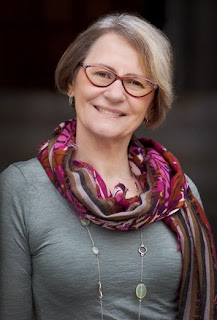 Posted by Bookluvrs Haven at 8:00 AM No comments: Links to this post 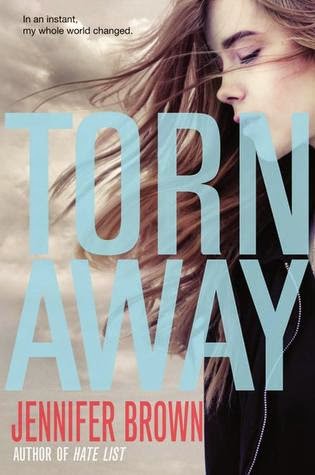 Jersey Cameron has always loved a good storm. Watching the clouds roll in and the wind pick up. Smelling the electricity in the air. Dancing barefoot in the rain. She lives in the Midwest, after all, where the weather is sure to keep you guessing. Jersey knows what to do when the tornado sirens sound. But she never could have prepared for this.

When her town is devastated by a tornado, Jersey loses everything. As she struggles to overcome her grief, she's sent to live with relatives she hardly knows-family who might as well be strangers. In an unfamiliar place, can Jersey discover that even on the darkest of days, there are some things no tornado can destroy?

In this powerful and poignant novel, acclaimed author Jennifer Brown delivers a story of love, loss, hope, and survival.

Living in Ontario, Canada, I do not see much tornado action. Except, of course, a few months after moving to Angus, we get a tornado, the likes of which this area had not seen since 1985, I was told.

Thankfully, outside of our fences being ripped off the ground, and a lot of debris to clean up and the loss of a tree on our property, we did not suffer many damages.. not like our neighbours some blocks over. No one was seriously injured, though, or killed, from what I understand, but it was stupefying, humbling and very scary nonetheless.

I ended up reading this novel after this happened, and I think that the experience allowed me to relate a bit more to this story. Though, in all honesty, I think that I would have been as emotional regardless, as the author was incredibly talented of conveying emotions in this novel.

Frankly, I can't imagine what it is like to lose everything in a matter of minutes. To have such a destructive force of nature take everything dear to you - your loved ones, your home, your possessions... And I certainly can't fathom that kind of loss as experienced by a teenage girl.

This novel was incredibly emotional and do raw, it left me breathless and exhausted.  From the utter shock, to the unspeakable grief and then injustice of Jersey's situation... I could barely recover from one emotion, before being assaulted by the next.  I have never wished so hard for a fictional character to find a happy ending the way that I did for Jersey.

From heartfelt tears, to justified anger and the blossoming promise of hope, I walked this journey with Jersey Cameron as she opened her heart, and welcomed in all the positives that did come out of such a horrible situation.

This was a wonderful story about grief, second chances and finding out that you have a strength inside you to overcome just about anything and I recommend it for readers of all ages.

I give 'Torn Away' 4 bright Stars! 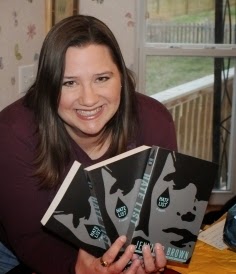 Two-time winner of the Erma Bombeck Global Humor Award (2005 & 2006), Jennifer's weekly humor column appeared in The Kansas City Star for over four years, until she gave it up to be a full-time young adult novelist.

Jennifer's debut novel, HATE LIST (Little, Brown Books for Young Readers, 2009) received three starred reviews and was selected as an ALA Best Book for Young Adults, a VOYA "Perfect Ten," and a School Library Journal Best Book of the Year. HATE LIST also won the Michigan Library Association's Thumbs Up! Award, the Louisiana Teen Readers Choice award, the 2012 Oklahoma Sequoyah Book Award, was an honorable mention for the 2011 Arkansas Teen Book Award, is a YALSA 2012 Popular Paperback, received spots on the Texas Library Association's Taysha's high school reading list as well as the Missouri Library Association's Missouri Gateway Awards list, and has been chosen to represent the state of Missouri in the 2012 National Book Festival in Washington, DC. Jennifer's second novel, BITTER END, (Little, Brown Books for Young Readers, 2011) received starred reviews from Publishers Weekly and VOYA and is listed on the YALSA 2012 Best Fiction for Young Adults list and is a 2012 Taysha's high school reading list pick as well.

Posted by Bookluvrs Haven at 8:00 AM No comments: Links to this post